Used a Bic Crystal ballpoint pen, a set of Stabilo Pastel highlighters and a pocket Moleskine sketchbook to create this journal comic. Was inspired to use things that I already had laying around, not in use, to fill in a page in a long abandoned sketchbook. I was actually surprised at how relatively well the highlighters worked here.

ReaperCon started yesterday and for the first time ever I’m actually able to participate. Yesterday I just listened to the classes, but today I jumped back in to painting minis.

This is the Reaper Bones Townsfolk Rioting Villager. After I took these photosI went back and softened the shading on his face a bit. I gave him a dirty, rusty pitchfork, and I tried not to take too much time on him (it still took longer than I would have liked). I also had a bad time with cutting off the mold lines, so I gave up after a few tries. In any case he’s not a display piece, but meant to be used in a game (when I can return to in person games).

I made a wet palette out of an old takeout box, some paper towels and a bit of parchment paper. I’ll later improve on it, but for now it gets the job done. I’m also experimenting with a new of taking painting notes in a notebook, but l’ll see if it works before I write about it.

So I’ve been drafted today to run a new roleplaying game for three players over Discord. Two of the players are experienced, one of the players is completely new to roleplaying games. After a bit of debate we settled on Dungeon World as our system. As an aside I’ll say that I highly recommend Dungeon World both for newcomers to roleplaying, and to GMs and players who are short on time. It’s a phenomenal system which lets you get to do a lot of cool stuff fast, and allows you to have a character that is fun and functional from level 1.

The challenge with this adventure is that I need to create something fast, so that we can have our first session sometime next week, and something that’s appealing and accessible to players with vastly different experience levels. Also, I actually need to have fun running it.

I’m also running the second session of a very dense urban D&D 5E campaign tomorrow. It’s a game that is challenging to run particularly in terms of tracking the vast and complicated cast of characters, and the various locations the game can unfold in.

So I thought that I’d write a few posts on the various tools that I use to plan, organize and track my games. What I use changes based on the game, and also based on how happy I am with the results I previously had with it. I’ve been DMing and GMing for 17 years now, and during that time I’ve tried out a lot of tools and approaches to handing the “backstage” parts of roleplaying games.

A few words about Covid: my main RP group moved to playing over Discord a few years ago, when one of the players moved abroad and we wanted to keep on playing together. We started out in Google Hangouts before Google did terrible business-y like things to it, and then we moved to Discord, which has been our home for a good long while. Due to Covid a lot of groups have now been forced to make that same move or else forgo playing at all, and the internet has exploded in the past few months with a lot of resources for running online games successfully. A lot of these resources are very helpful, but a lot of them also just add “noise” and added pressure to the already tough job of being a DM/GM. If you are running a game for an online group, whether it’s your first game or not, don’t feel the pressure to run a game at the level of production that you see on various podcasts/twitch/YouTube channels. You don’t have a production budget, you don’t have a production team, and here’s the thing: your players aren’t expecting that. They just want to get together and have fun for a few hours. Prep as you would for a face to face game, with a little added attention to images that you can send in the chat (monsters, NPCs, maps, etc), and make sure that you have video on, or the players will miss a lot of nuance in your body language. Keep it simple and add complexity only if needed, later on. I recommend using Discord with the Sidekick and DiceParser bots (you want two as a backup, because eventually one of them will lag or break), and Google Docs/Dropbox to share sheets and information between sessions. If you’re playing D&D 5e then I highly recommend managing the character sheets on D&D beyond, and gradually learning to use the Avrae bot in your game (it’s got a lot of commands, so don’t sweat it if you don’t start running all your combat scenes with it from the first session on). If you need a mapping resource, here’s a free, open-source browser based tool called mipui that one of the former players in our game made. It’s very simple to use, and it works just fine for D&D games. I recommend using it in Chrome. Remember that technology has a tendency to break and jitter, and be patient.

If you’re someone that’s always wanted to play but never had a group, now is your golden age. Tons of new groups are forming up using Facebook, Reddit and Discord to find new players.

This post came out longer than I expected, so I’ll go an brainstorm and plan for my games, and I hope that you find your people and start gaming too. There’s nothing like RPGs to bring a group people together for a few hours of blissful, harmless fun.

After a long, unplanned hiatus, I’m running my free-form illustrated adventure, Vengeful Fortress. See previous instalments here: part 1, part 2, part 3, part 4, part 5. Drawn on a Stillman and Birn Epsilon sketchbook (review in part 1), with Schminke watercolours, various fountain pen inks (see if you can guess which ones), and from this instalment, with Deleter Neopiko-Line-3 fineliners.

Our D&D group found itself next to a colossal sleeping white dragon, and one of the characters suggested that we could take it on. I grabbed my Blackwing (811) and created a quick illustration of relative sizes to emphasise just how crazy that idea was.

We didn’t attack the dragon.

What would you have done?

Welcome back to Vengeful Fortress, a fantasy roleplaying game that I’m drawing in ink and watercolour (no pencil underdrawing, to save time) as I’m running it for my group of players. We’re now in Part 3, and here are Part 1and Part 2 (which also include a review of the sketchbook I’m using, the Stillman and Birn Epsilon).

As you can see, things are starting to heat up. I’m using a TWSBI Diamond 540 fountain pen with a fine nib, filled with Rohrer and Klingner SketchINK Lotte. SketchINK Lotte is a black pigmented and waterproof fountain pen ink. It’s not a saturated ink, and you can see the grey shading quite clearly here in the lettering and the line work. R&K SketchINK Lotte is also a hard starter, so while it does flow well enough when you get it primed up with a few preliminary scribbles, if you put the pen down for even a few minutes, you’re going to have to prime it again. It is, however, waterproof and relatively fast drying, which makes it worth my time using it. In case you’re wondering if “hard starting” is just an issue with this pen or this nib, I have tried R&K SketchINK Emma and Lotte in a Lamy Safari and a Super5 pen and they are hard starters in all cases. It seems to be a property of the ink, perhaps because it dries to relatively quickly, or because of the particular waterproof formula R&K are using here.

So know that you can trust the Rohrer and Klingner SketchINKs with your watercolours, and know that they’re great for when you’re in a rush and don’t want to wait for the ink to dry, but also have a bit of scrap paper for the first few seconds before you use them .

You can find part 1 here. You can see that there is a slight bit of show through with the Stillman and Birn Epsilon, but at only 150 gsm that’s to be expected.

I decided to play a bit more with ink colours and wider nibs here, so that’s a Sailor medium stub nib and Diamine Inkvent Blue Edition Candy Cane ink for spells and effects: 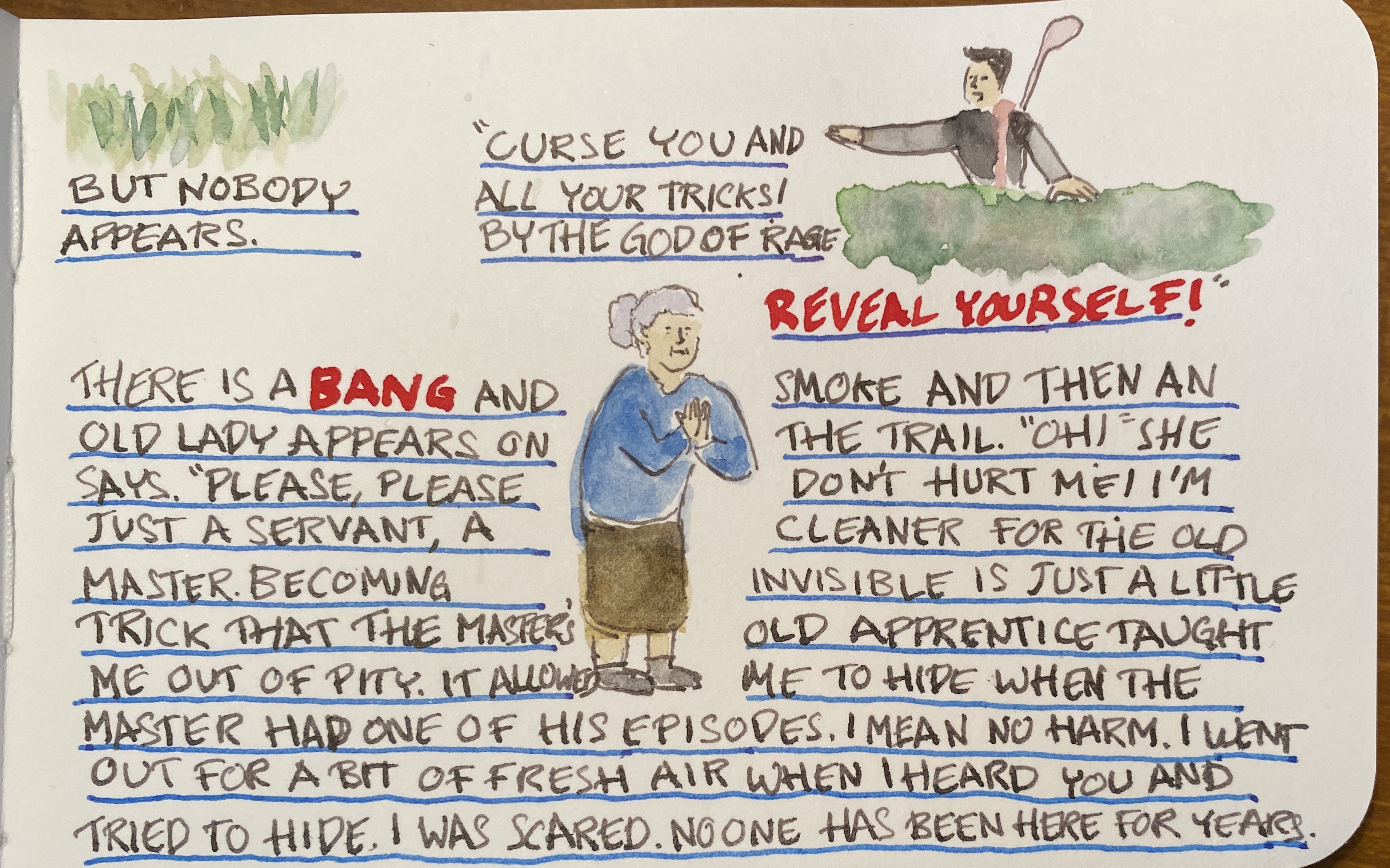 There’s no show through for the ink, and though it may not seem that way, there was no spreading. Also, if you like granulating watercolour effects, the Stillman and Birn Epsilon paper seems to be a champ for that.