There is a local group of illustrators and animators that have set up a delightful new tradition during the pandemic: they meet up every Tuesday morning on Zoom for a sketch/doodle session, where they do quick, loose sketches and doodles just to warm up and experiment. Once a month the morning Tuesday meeting is replaced by a night Monday meeting with a guest artist leading the session with various prompts. Tonight my Urban Sketchers chapter head lead the session, and through her I joined the fun.

As I’m neither an illustrator or an animator, I’m posting everything here as quickly as possible before I see the other artists’ amazing work and lose my nerve.

We started with the suggestion to just doodle while we waited for people to join. I was using a new sketchbook that was very cheap, laid flat and had thick textured paper (good for pencil). I used a Caran d’Ache Fixpencil with a 2B lead, and a Tombow brush pen throughout this one hour session.

We started with a few blind contours, which I haven’t done for years, and so I kept catching myself automatically glancing down at the page. Definitely something I need to practice to get used to drawing these again. We were using Shutterstock films as our models, so that subject was moving around, some of them quite a lot. The idea was to get used to sketching people in motion, grasping as quickly as possible what captured their character.

This looks good if you don’t know what the original looked like. I do, however, like the boldness and flow and expressivity of the lines here. Something to recapture in the future.

Then we did an exercise where we had 10 seconds to look at a moving person and try to remember what made them them, and then draw a portrait of them from memory. As Marina suggested, it’s easier if you describe the person to yourself in a few sentences.

The second subject drawn as a blind contour:

We only had a minute for each portrait, and that was too little for me. It’s a good challenge to practice in the future (working under such short time limits with such complex, moving subjects).

The next exercise was to capture the subjects feelings. Again, a 2 minute time limit would have been more in my wheelhouse.

The second subject for this exercise went through every emotion in the book so I couldn’t settle on one.

The third was just fun though:

Then we did a caricature exercise, where we tried to draw people as not overly stylized caricatures. We has a minute for each, and I was starting to warm up at this point:

The next exercise was a strange one – to draw a person as if he was morphing into an animal and we caught them in the middle of the morph.

This was fun and very creative:

The next one was to draw people in action, in one minute. To capture as many gestures as possible. I guess that the animators had a field day with this one, but I really struggled.

Finally we had 15 minutes to draw each other. I had a lot of fun with this, and the earlier exercises really did help me warm up and loosen up and work faster.

These exercises are definitely something that I’ll try to warm up before drawing portraits, and they’re also just a lot of fun to do. If you have a minute, a pencil and a blank page I recommend that you give them a go.

My first Urban Sketchers Sketchcrawl of the year (there was one earlier, in March, but my mom was hospitalized, so I couldn’t make it) to the brand new Park HaMesila in the beautiful Neve Zedek neighbourhood. A dump and parking lot have been transformed into a park that will lead all the way to the Tachana complex once it’s complete. At the moment it offers a very little shade and not much greenery, but you can see the potential, and you can definitely see how much people are loving it.

The park follows the old Turkish railroad (which went from Jaffa to Jerusalem and was notoriously slow), and though I didn’t draw them because things were starting to get too busy in my sketch, the path has old rail lines embedded into it, which is a lovely touch.

I then drew part of Suzanne Dellal’s Center of Dance (it’s the Batsheva’s Dance Company’s home, and in Hebew is generally pronounced Suzanne Dallal).

A spread summarizing my day and a bit more of the neighbourhood, created at home (unlike the first two) from pictures. I traced the map from a navigation map that I got from a local navigation race that happened to take place in the area, and had fun with some design elements that I learned in the Sketchbook Design course that I took.

I used my new palette and a brand new Stillman and Birn Alpha and I quite like the freedom that its lightweight paper encourages.

We haven’t had an Urban Sketchers sketchwalk in Tel Aviv since June due to Covid-19. We met today and drew, socially distanced and with masks, for three hours in Dubnov garden, which is not far from Rabin Square and is just behind the Tel Aviv Museum of Art.

The first drawing, focusing on the strange rock sunken sculpture in the middle of the garden, was drawn on a Stillman and Birn Pocket Alpha, with a TWSBI ECO 1.1 stub filled with Rohrer and Klingner Emma SketchINK and Schminke watercolours.

The second drawing is a panorama of the architecture near the park, and it was drawn on a Moleskine Large Watercolour notebook, with the same materials and the drawing above.

My drawing challenge has allowed me to streamline my process and bring in much fewer art supplies to the sketchwalk without feeling that I’m missing out. It was also the first time I brought my Walkit sketchbag to a sketchcrawl and it worked very well. I’ll write a review of it later on, once I’ve finalized the kit I put in it.

After months with no sketchwalks, Urban Sketchers Tel Aviv met up at Gan Meir for a sketch session. Here are the results: 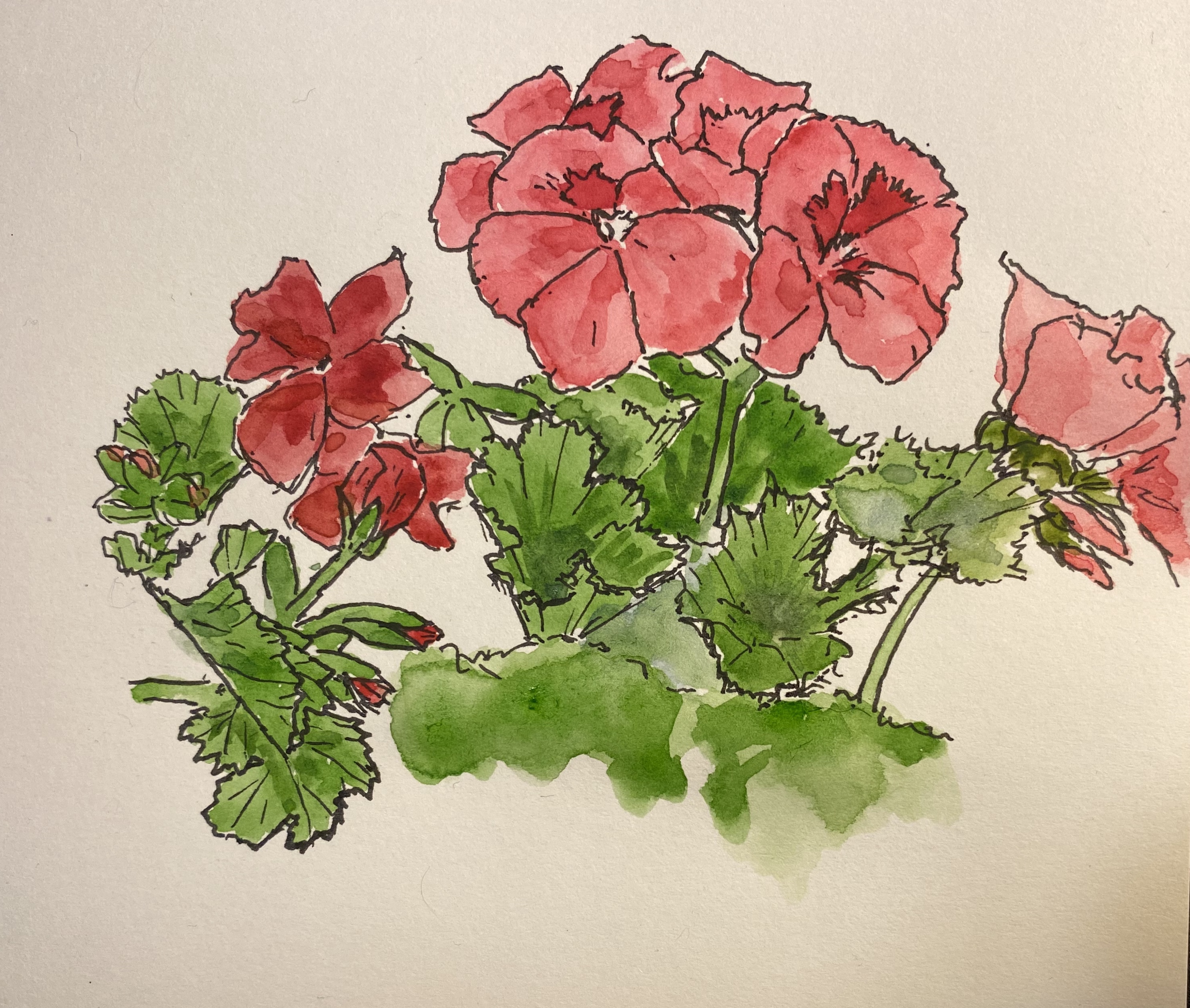 It’s a weird one, but the flowers are still blooming and there’s still hope in the world. Try to stay happy and healthy, even if it means staying away from your family this holiday (as I am).

Here’s the drawing before I applied watercolour to it. Feel free to print it out for your personal use, and colour it yourself.

I drew this during an Urban Sketchers sketchwalk to the Tel Aviv port, but I never posted it online because life got in the way. 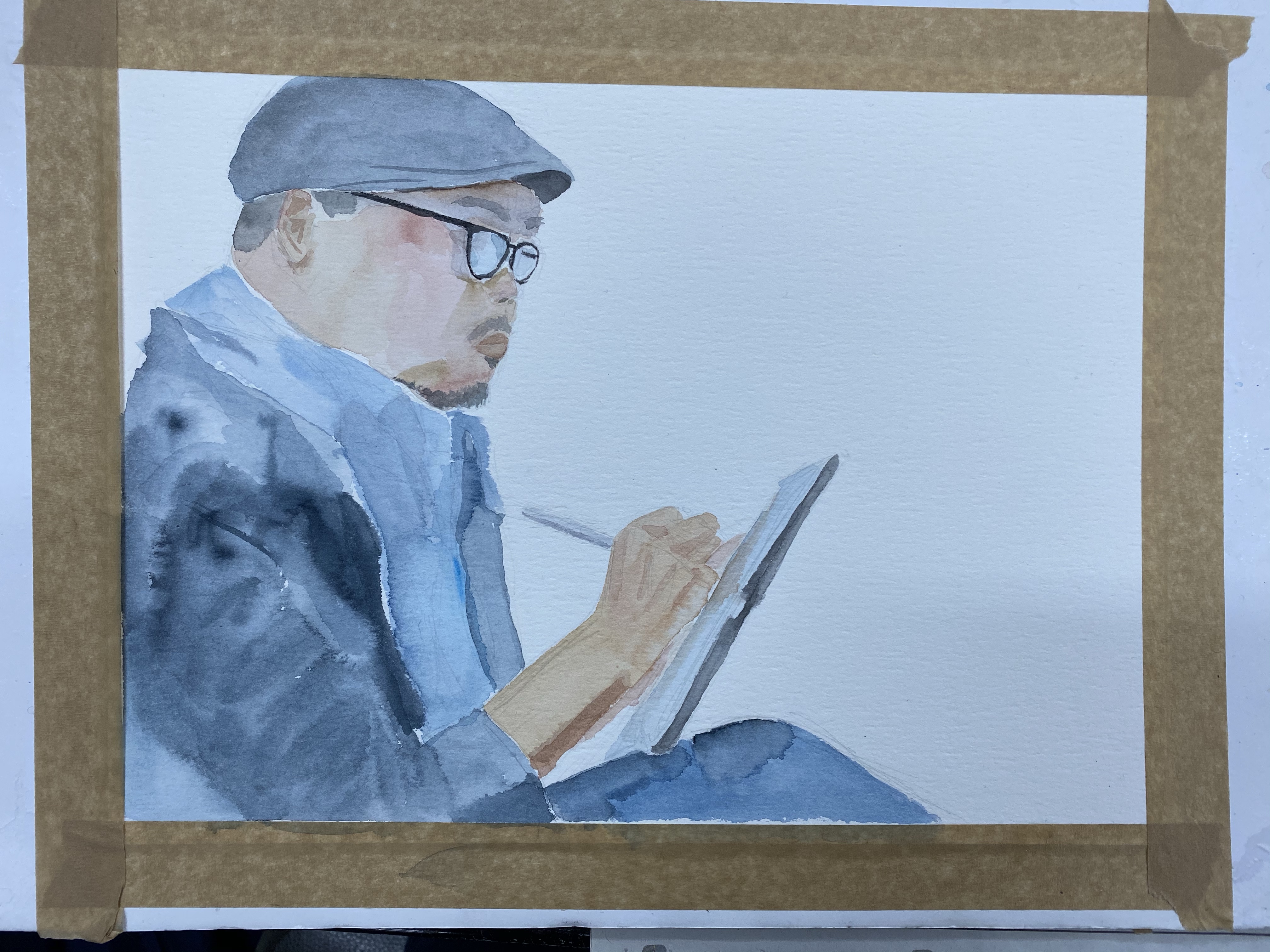 Decided to work on a more conventional piece, and so I drew a watercolour portrait of Urban Sketcher Rob Sketcherman at work.

A sketch on location of my polling station in Tel Aviv (don’t be creepy) on election day.

While I was sketching an elderly volunteer came for a chinwag in the shade, and then stayed and chatted for a good long while. I guess he was lonely. And later two girls came around selling cookies and lemonade for charity, so I bought a cookie and talked to them while they watched me draw and tried to sell their wares. 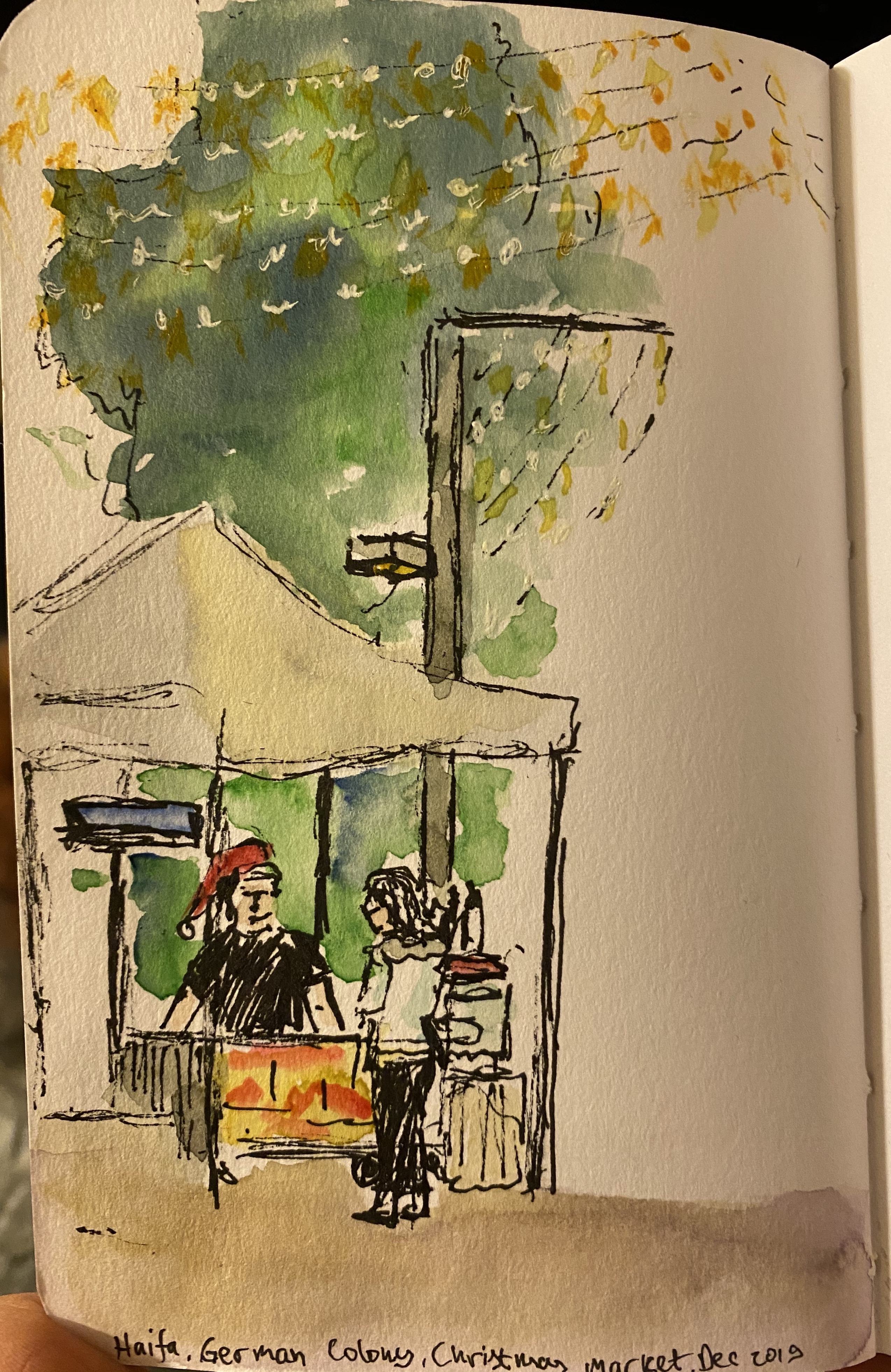 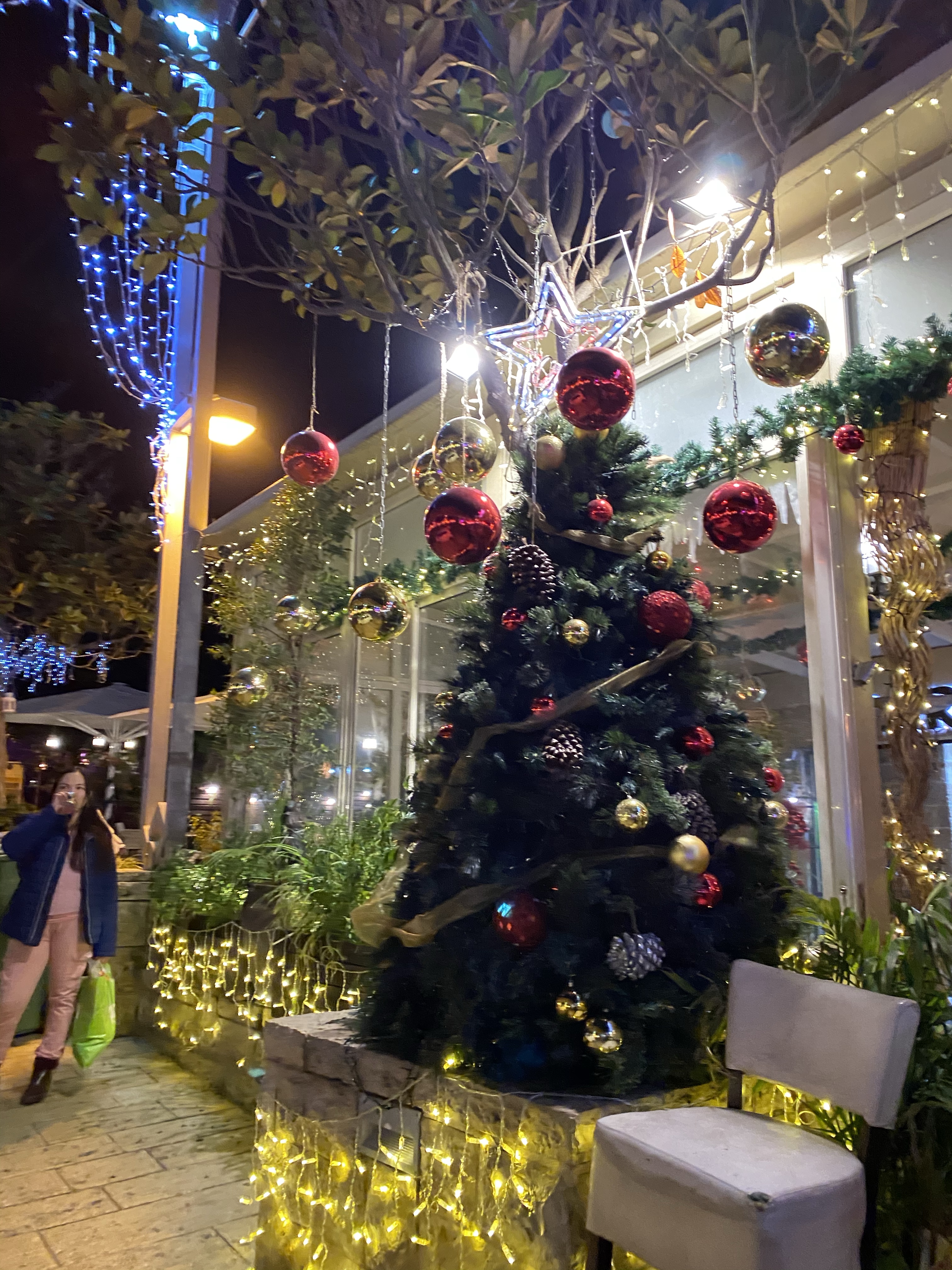 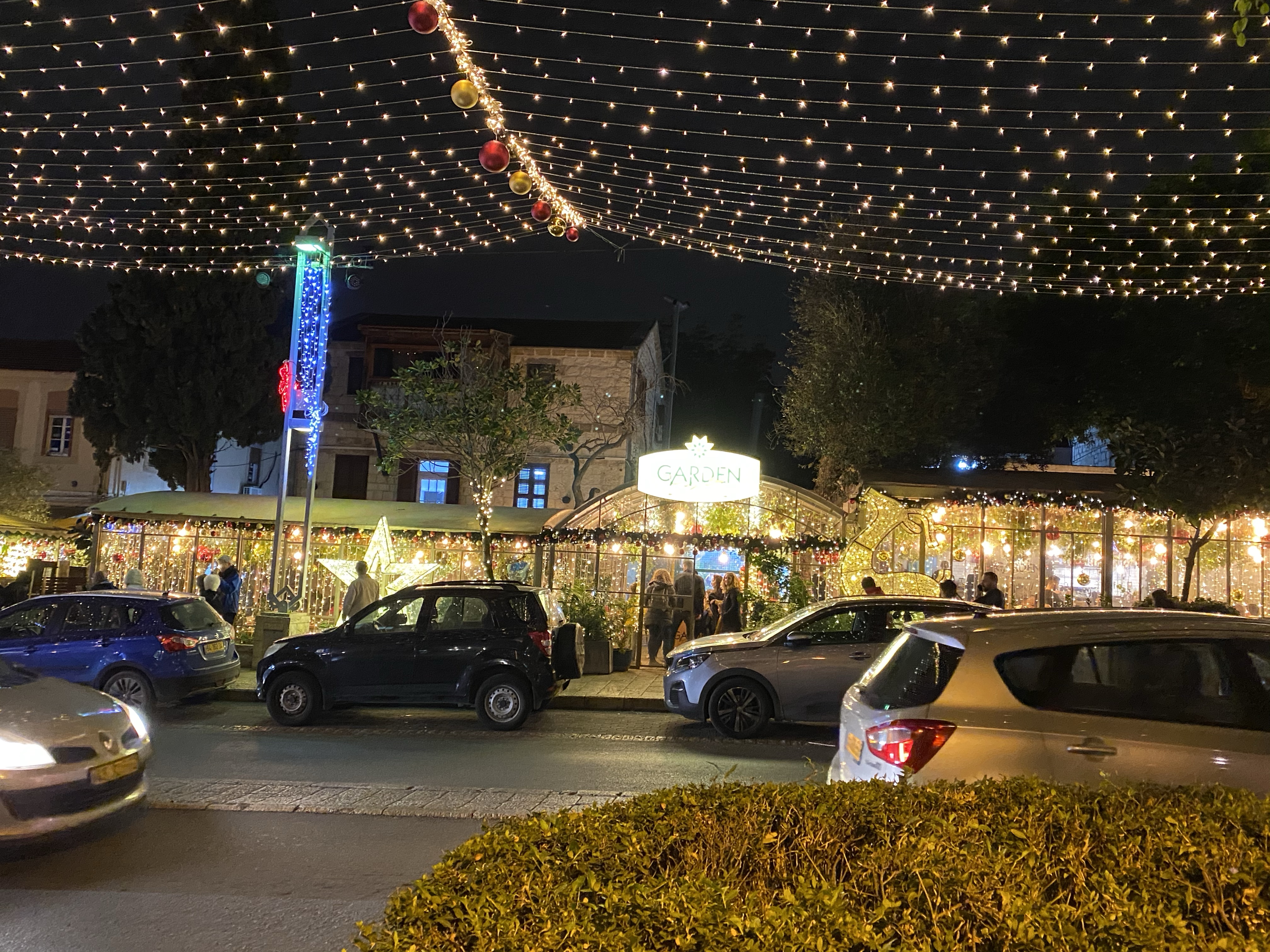 A 10 minute sketch of a Bauhaus building in Tel Aviv, and less than 5 minutes of watercolour. This proved to me that I have time to draw even when I’m super busy.