It’s strange that I haven’t yet reviewed the pen that I use most, but that’s life, I guess. The Ti Arto is a titanium machined pen that accepts 200+ refills, and it has been my EDC and journaling pen since November 2016. There’s no pen I use more, and no pen I like more than this one.

Since the Ti Arto bashes around freely in my bag, it’s got quite a few scratches on it. I personally like that it shows some wear and tear, but as not everyone feels the same, I thought I’d take a few photos that show how the Ti Arto looks like when it’s not brand new. 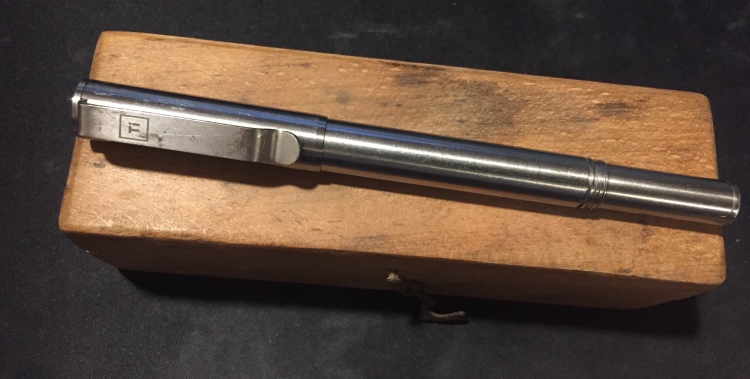 The Ti Arto is made out of solid titanium, and doesn’t get dented even if you drop it. It does, however, show micro-abrasions and scratches.

None of these scratches is deep enough to be felt – they’re at surface level only. So it really is just an aesthetic thing. If you like your pen to look brand spanking new, the Ti Arto comes with a protective felt sleeve. I personally wouldn’t bother: this isn’t a fountain pen, but a tough, machined, EDC pen. It’s built to tumble around in your bag.

Now to the review proper: the Ti Arto was originally launched on Kickstarter, and became available on the BigiDesign site sometime in 2016. The pen is machined out of solid aluminium, and made to easily accept 200+ refills with no tip wiggle or need for spacers.

The Ti Arto is well balanced, both capped and uncapped, and very comfortable to use, even for someone with small hands that likes to write a lot. Unlike some other machined pens, the Ti Arto’s cap will stay on, even after years of use and after the threads start to wear out a bit. See that semi opaque silicone ring just below the threads? That’s the magic that makes sure the cap closes nice and tight. No refill is going to dry out or leak in this pen.

If you want to post the Ti Arto you can, by threading the cap to the back of the pen. The resulting pen is a bit longer, but still well balanced, and the cap doesn’t rattle when you write. It does take time to screw the cap on, so if you uncap and post often it will become a chore. Since the Ti Arto isn’t a fountain pen, though, there should be no problem leaving the pen uncapped for a while.

I use the Uniball Signo UMR-85N refill in this pen (the same refill that goes into the Signo RT). To change the refill you unscrew the section, pop the refill in, screw the section almost all the way back on, then tip the pen body forward until the refill tip protrudes, and then you tighten the section. Since you probably aren’t going to actually use 200+ different refills in this pen, I recommend finding a refill that you enjoy and buying replacement refills in boxes of 10 or 12 on Amazon or eBay. I go through a box and a half to two boxes of UMR-85N refills a year in this pen, and it takes less than a minute to switch out the refill. 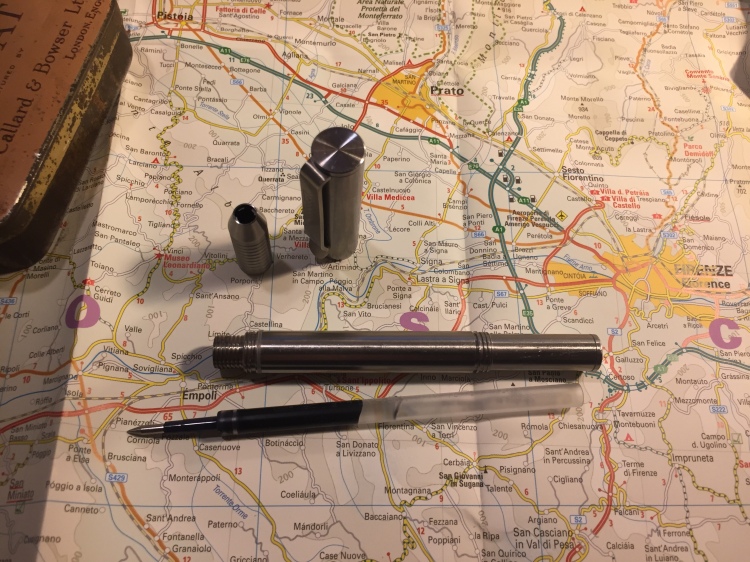 Here’s are a few points about the Ti Arto, drawn and written with the Ti Arto: 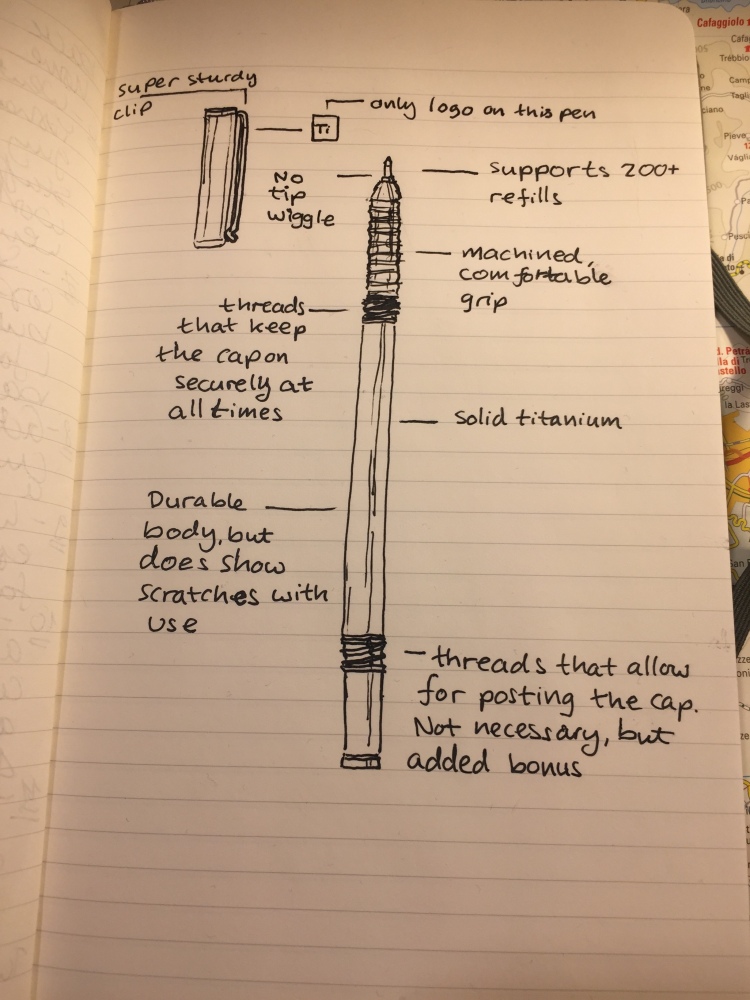 If you are looking to own just one good pen, or if you’re looking for an EDC or machined pen, the Ti Arto is the pen you should buy. I’ve tried a good number of machined pens so far, including all the other (non-stylus) offerings from BigiDesign and nothing comes close to this pen.

Join 1,019 other subscribers
Follow Writing at Large on WordPress.com