It’s the Moleskine of Truth! No, it’s actually just the Moleskine Wonder Woman Blue limited edition notebook. This is a brand new edition for Spring 2019, and there’s a red one too (expect a review later on).

The notebook with the wrapper on makes you think that there will be a red element on the cover, but the print on it is only in black and yellow on the blue background. 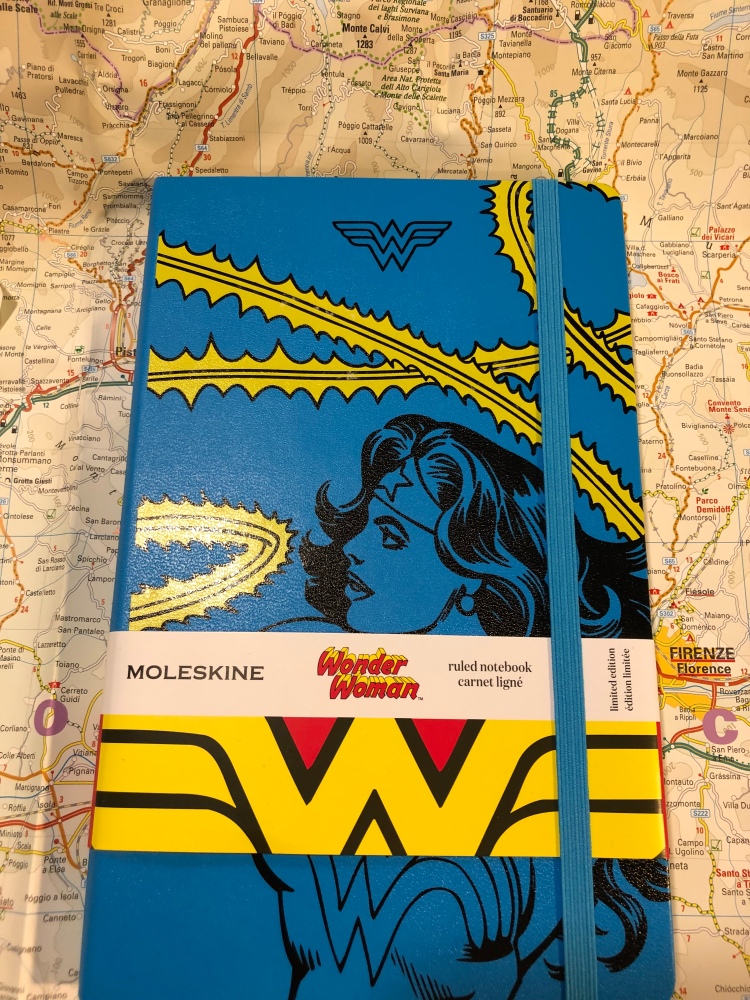 There’s a quote on the back of the notebook (there’s a different one on the red notebook), and it’s lovely. Go, Diana! 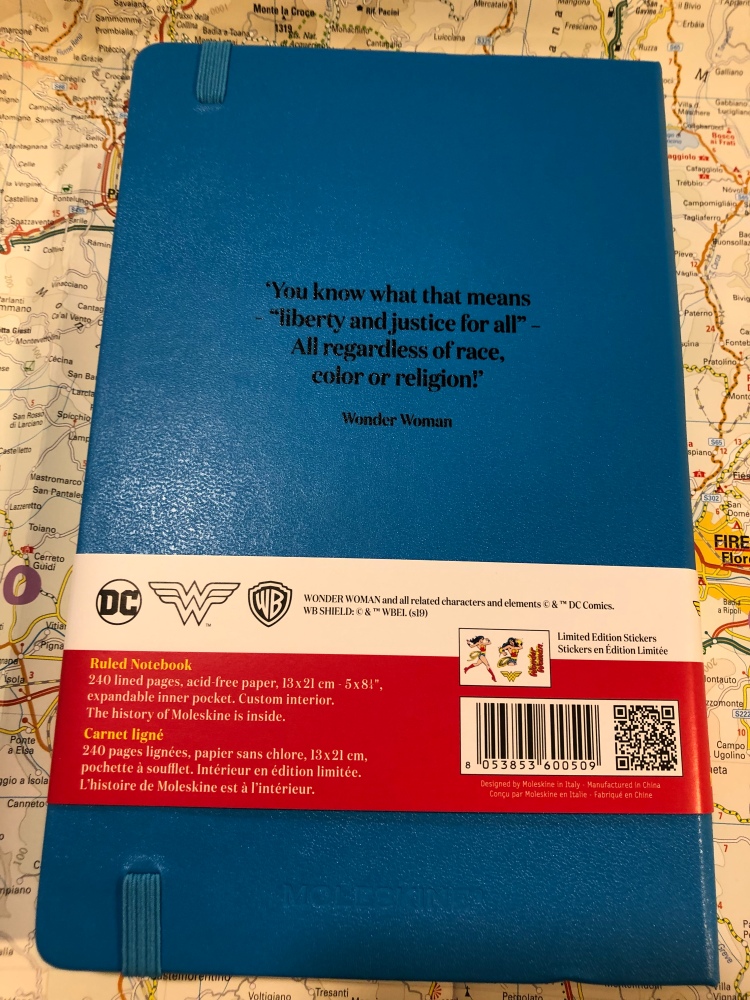 Now we come to the biggest issue I had with this notebook: it has some printing quality control issues. If you look closely you can see that on the yellow lasso print there are tiny bits of paper stuck to the cover. It feels as if there was a sticker there and someone removed it with bits left behind. They aren’t sticky and they are very easily removed with a wet wipe, but that’s not something I enjoy dealing with when unwrapping a brand new notebook. It’s only on the yellow parts of the print, so it is probably a leftover of the printing process, but it shouldn’t have slipped through. 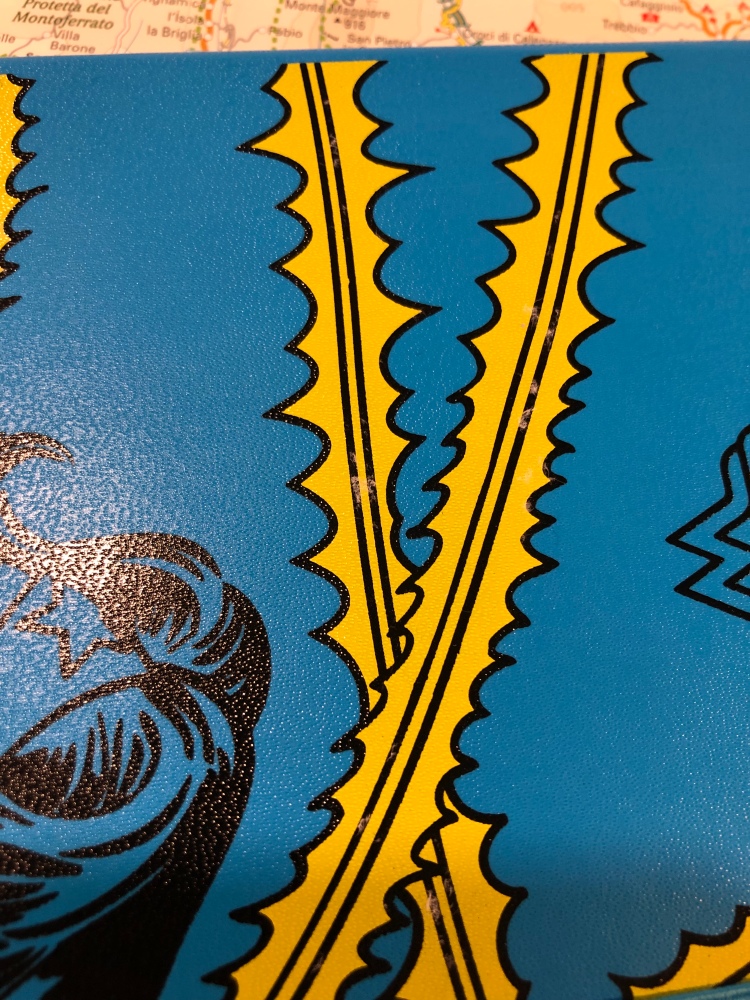 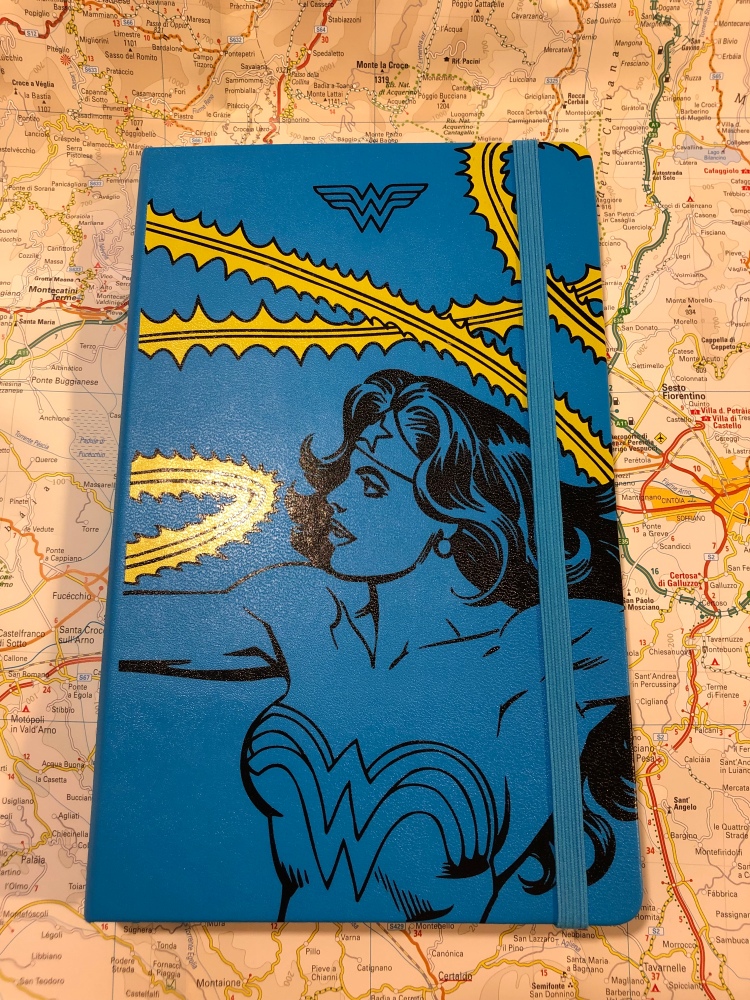 I understand the design aesthetic here, but I don’t agree with it. It would have been nicer if it was black, yellow and red and it would have been even nicer if Diana (Wonder Woman) was in full colour. As it is, the lasso is more attention grabbing and vivid than she is, and it’s not the main point. This isn’t the “Lasso of Truth” limited edition notebook, is it? 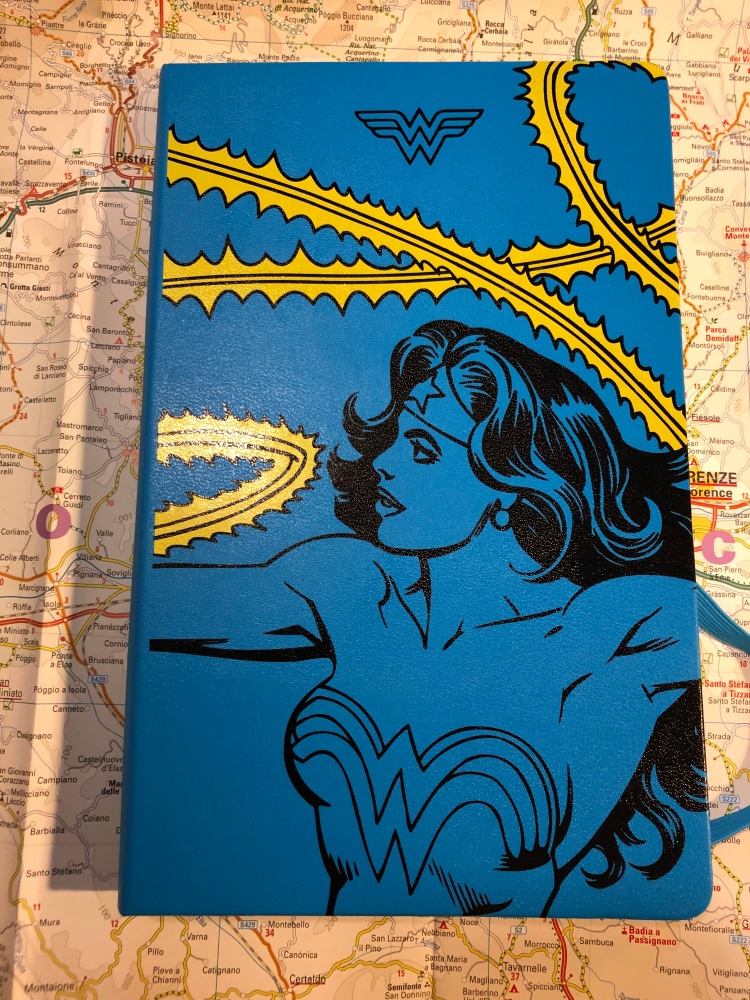 Here’s the unwrapped back cover, which is a little plain compared to what Moleskine have done for Batman in past limited editions. 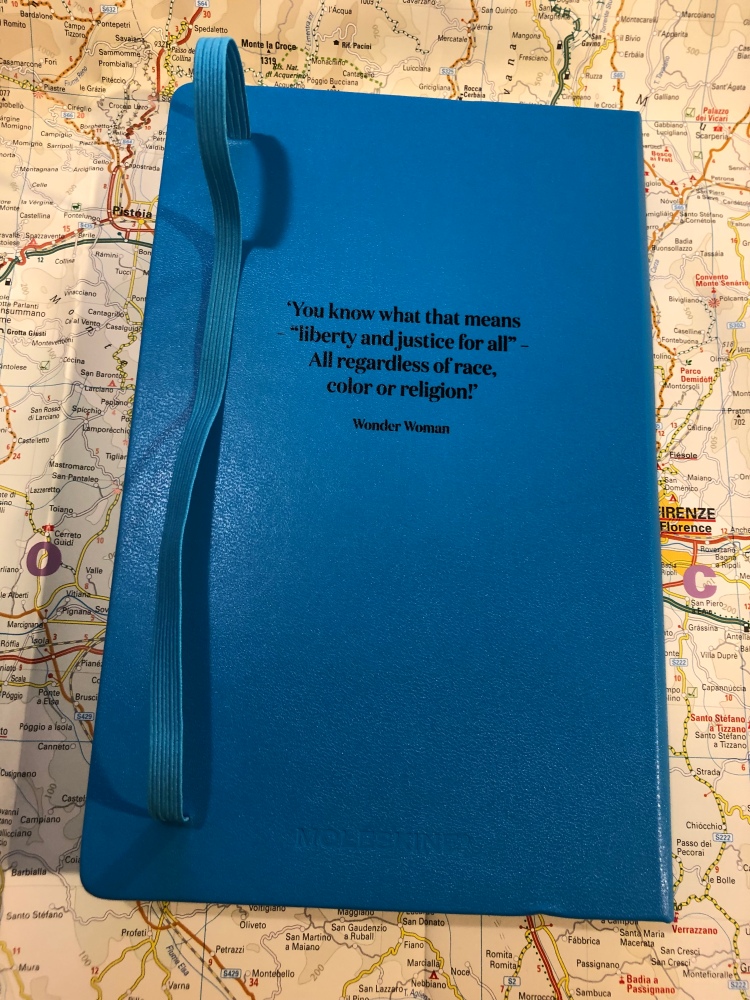 The front end paper plays with the lasso of truth design element, and again, I really wish that Diana was more represented in this edition. Maybe her doing her thing, or even a comic book page. She deserves the same excellent design that Moleskine made for Batman and Star Wars. 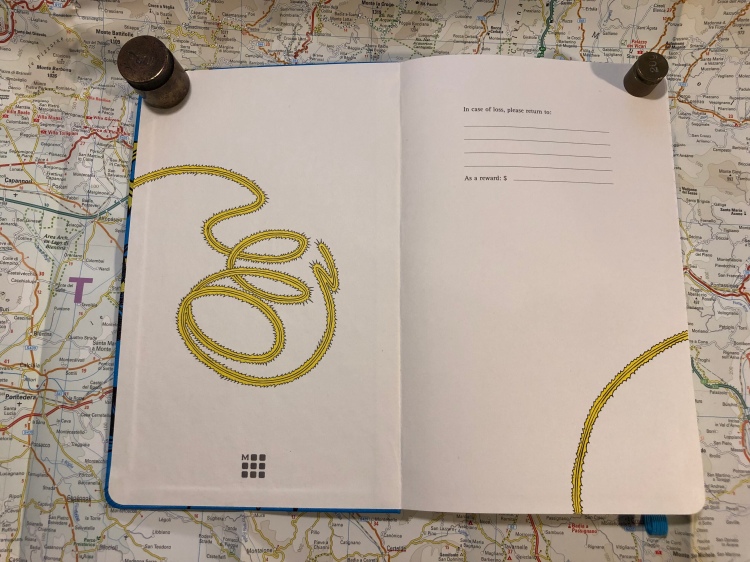 This is better! The back end page is where it is. You see Wonder woman using her lasso which… is mysteriously cut out mid back-pocket. What? Why? If only they hadn’t done that, or at least if it would have vanished into the pocket. It just looks weird here. I get that it disappears into the page so that it looks like she’s shutting the notebook’s cover, very clever and comic book-like, but take a step back and just look at the page layout. It’s… not good. 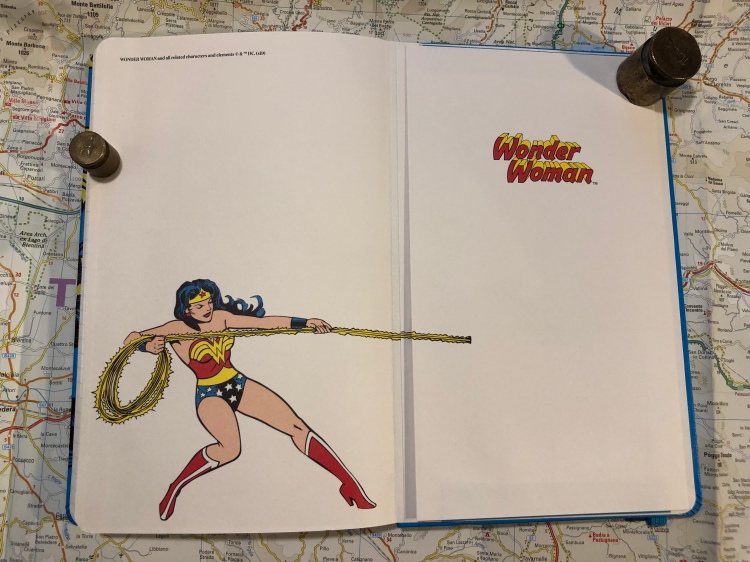 Inside are lined pages and a blue ribbon. The paper is the newer kind, so there’s no weird spidering, it’s good for gel ink pens, ballpoint, pencil, and certain fountain pens and inks (Noodler’s Black works with every fountain pen, all else needs testing, but generally speaking fine and extra fine nibs and inks that aren’t overly saturated or wet will work fine. The paper is thin, so there will be show through). 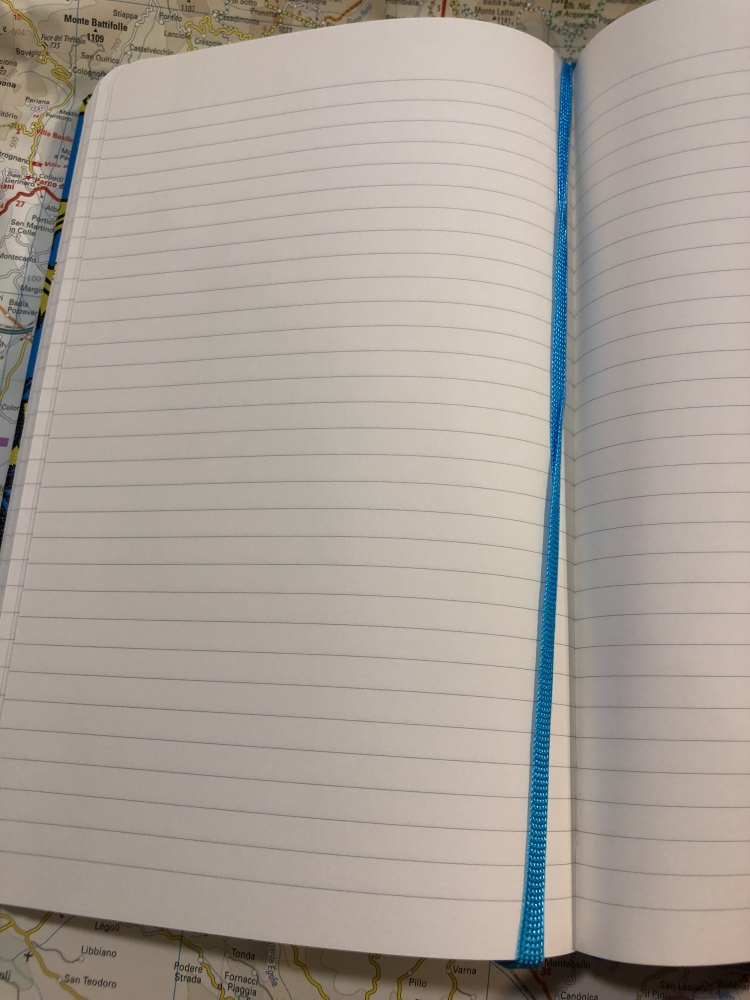 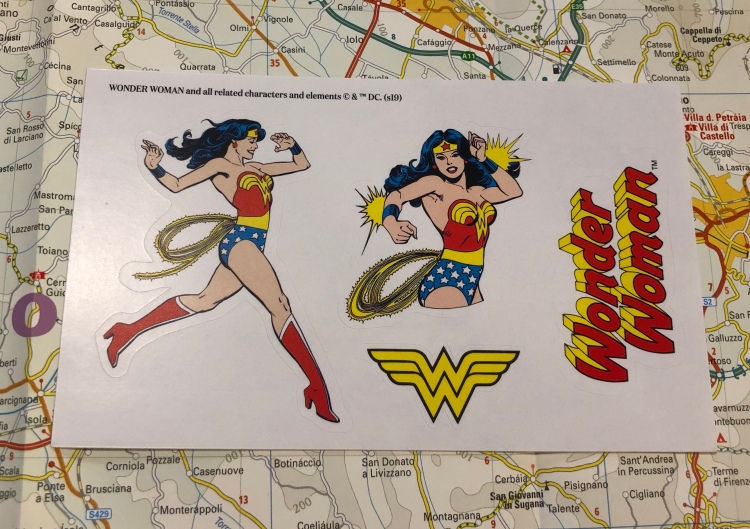 The Wonder Woman fan in your life is probably going to love this edition, even though Moleksine can and does do better. It’s fun, it’s unusually colourful (most Moleskine limited editions feature black covers. They’re like Ford that way), and it will probably be on deeply discounted sale soon, so stock up then for gifting or as an everyday notebook.