Moleskine recently came out with three James Bond themed limited edition notebooks, and after a bit of scrambling, two orders that were cancelled on me, and a bit of trouble with the post office I finally got them. To be honest, if I had that much trouble getting any other recent Moleskine limited edition, I would have probably given up already, but this one is special, for two reasons. The first and main one is my dad. He introduced me to James Bond, we watched all the movies together (some on TV, the later ones in the theatre), and it’s our “thing”. The second one is that I have a thing for maps, and once I saw the map on the endpaper, I knew I had to have them.

All three large notebooks are pretty great, but the Titles edition is probably the weakest among them. The front cover (and only the front cover) has a print of shiny black on the usual matt black of all the James Bond title logos. It’s so interesting seeing them together, with their various fonts and embellishments . It’s also hard to photograph because the gold 007 embossed on the cover of all three editions reflects so much light. Shiny! 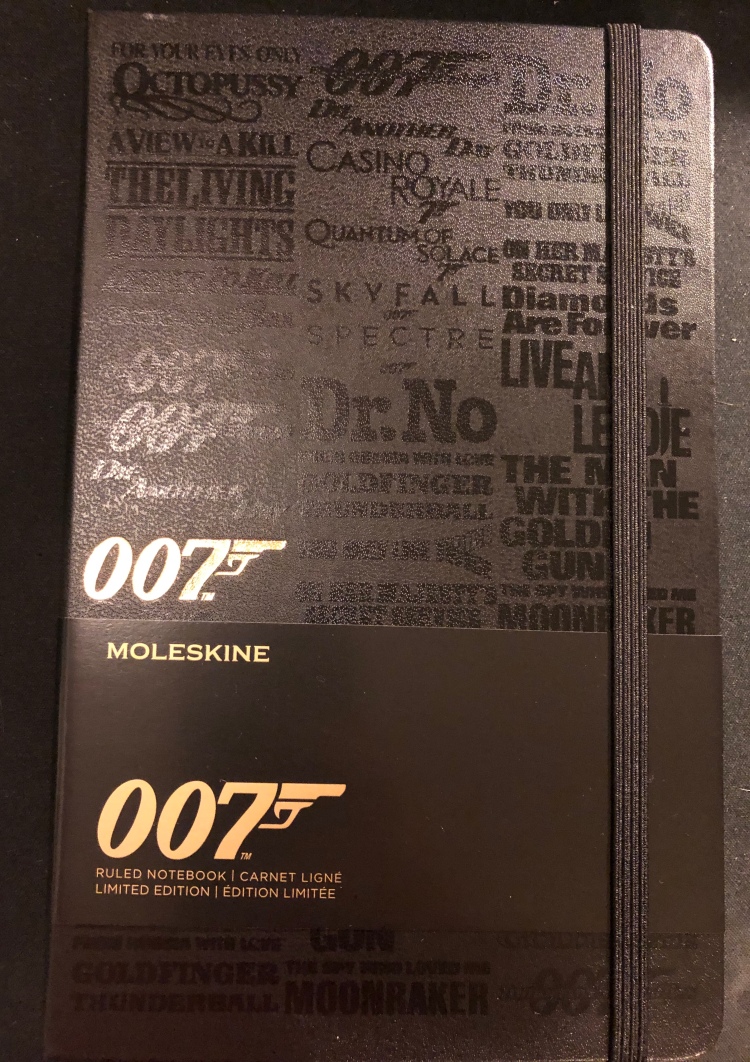 But there are two minuses here: one, the design doesn’t wrap around the notebook, it’s only on the front cover, and two, the titles only appear to be embossed, in reality they add no real texture to the notebook. This is such a shame because the other two notebooks in the series, the Carbon and the Box Set are so very tactile. It takes this notebook down several pegs, from the “great” to the “just OK”. It’s on par with the Star Wars Ships and Lightsaber Duel editions for me. Another very good edition that missed becoming excellent by so little that it becomes mediocre.

Everything else about this edition is stunning. I love the map, and the idea of having it there and tying it to globetrotter Bond through the B-side of the paper sleeve around the notebook (keep reading, I’ll explain it all later on). You could easily use a white pen to mark your own travels if you are planning to use this as a travel journal. 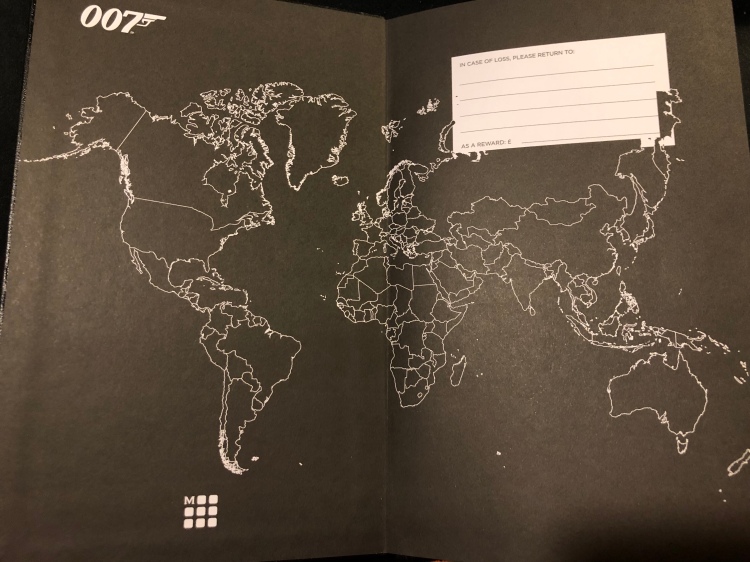 The back end paper is also great, with the titles cover design printed on it. Can you imagine now how much better this notebook would have looked like if it had this design on the spine and back cover too? Embrace the typeface, embrace the titles Moleskine!

They do get extra browny points for aligning the pocket with the type on the endcover. That is not something trivial to do, and it gives it all a nice touch. 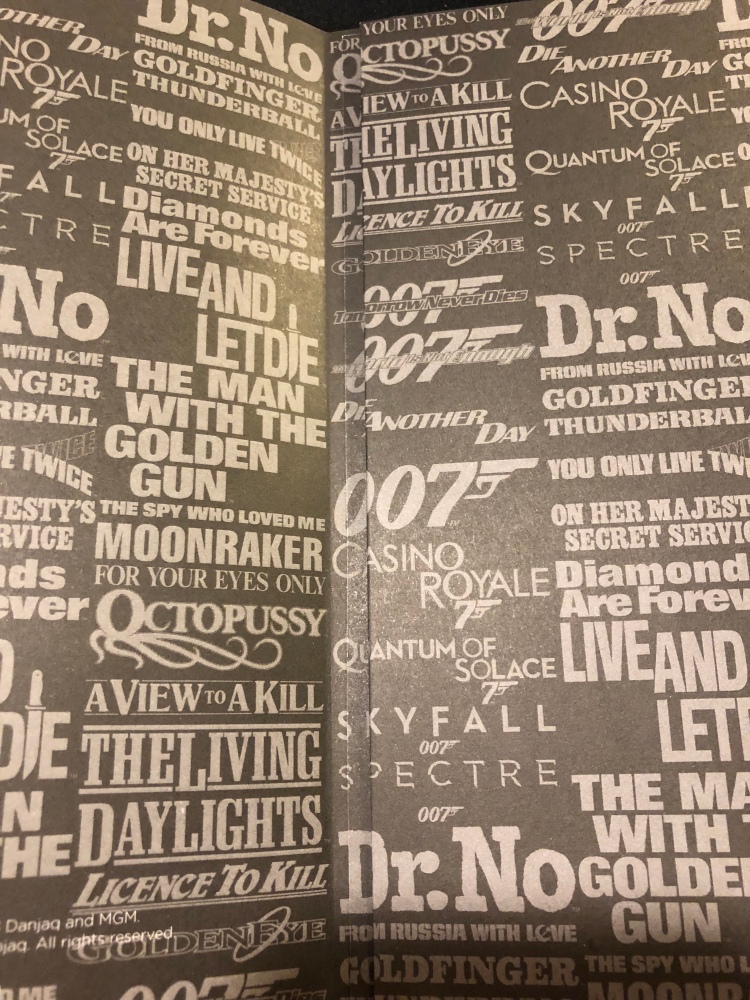 Like most Moleskine limited editions, this one comes with stickers which are pretty understated, and would probably come in handy if you’re planning to use this notebook as a personal or a travel journal.

Remember the map on the front endcover? Well if you’re a huge James Bond fan, you can mark his travels on that map using the B-side of the sleeve. It has a list of James Bond film titles printed on it, with the date it came out on and the places the movie takes place in printed on it. 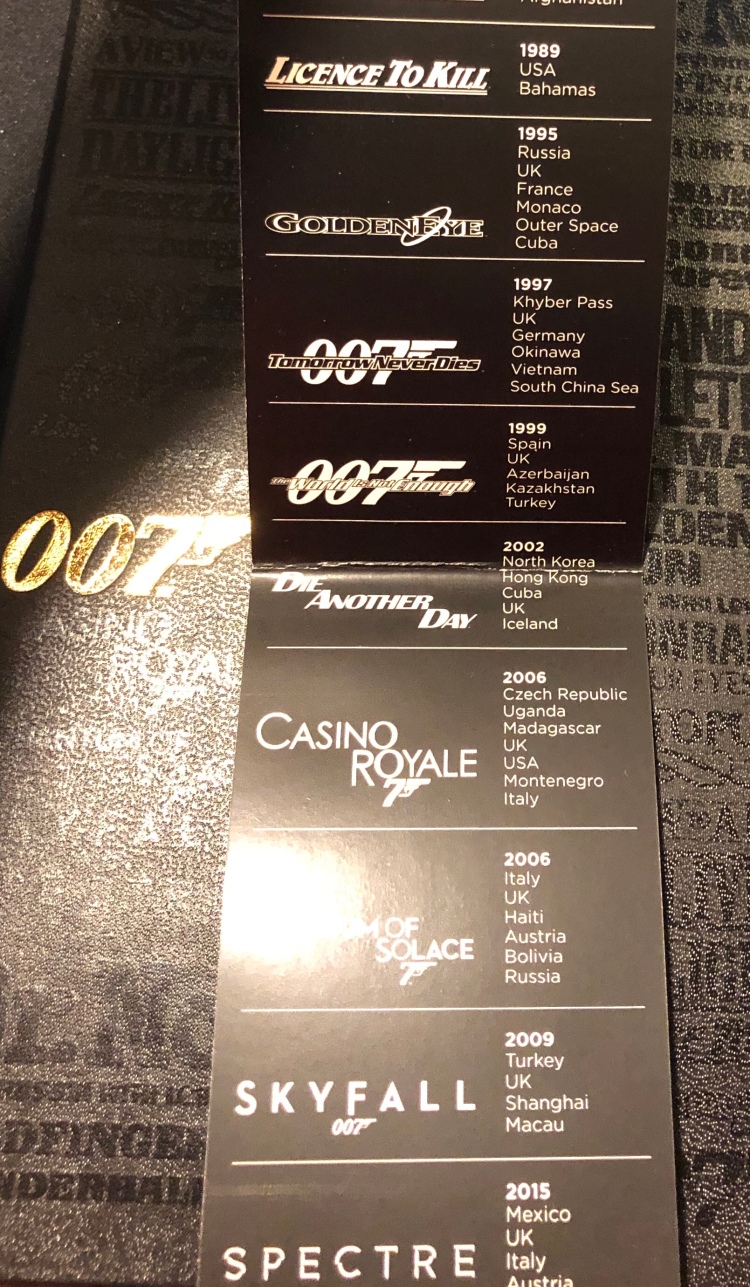 So, should you get this notebook?

If you’re a James Bond fan, then yes. If you’re looking for an interesting travel journal or a gift for a cool dad, then also yes. If you’re just looking for an alternative with a twist for your run-of-the-mill Moleskine large hardcover notebook, then I’d recommend the James Bond Carbon for a more understated but unique look, or one of the more colourful limited editions that Moleskine has issued lately.

Wait, what about the paper? It’s the same Moleskine fair of recent years. Expect significant ghosting and some bleed through to the other side of the page, no spreading but a little bit of spidering when using fountain pens, and a very smooth surface that may cause darker pencils to smear. It’s great for ballpoint, gel pens, highlighters (no spreading!), and certain kinds of fountain pen ink (Noodler’s black, Waterman Blue and Blue Black, and too many Diamine inks to list. Avoid J. Herbin and other watery inks like the plague) with medium or finer nibs. I don’t mind the ghosting (it’s the same as on Tomoe River Paper) and use both sides of the page, but that’s obviously up to you.