I also read 42 books, almost twice as many as I originally planned on reading.

I finally finished the first draft of my novel and started working on the second draft.

I went on the Big Thunder Mountain Ride in Disneyland Paris, despite being afraid of heights, and I ran a 5k and a 10k mere hours apart in the Disneyland Paris Half Marathon Weekend.

I translated and heavily adapted a Parsley game for a friend’s wedding, arranged a Tabletop Day gathering, played  and I started playing Pandemic Legacy 2. So far Matt Leacock is killing it with the story on this one.

I saw and enjoyed Wonder Woman, and I saw and loved Star Wars: The Last Jedi. I planned on going to more movies (I can’t believe I missed Coco, but travel plans will do that to you), but I’ll make up for it in 2018 I’m pretty sure.

I ran three 10K races, two 5K races (and 3 virtual 5Ks), more kilometres than I have ever run in a year (over 700), and I broke my 10K PR. I ran like through downtown Washington to the Mall and Lincoln Memorial, and through Greenwich Park all the way up to the Greenwich Observatory. I learned to appreciate yoga.

I joined Tel Aviv’s Urban Sketchers and went to sketchcrawls in Jaffa, Neve Zedek, the Carmel Market, Rothschild, and Florentine. I drew 100 people in a week as part of Liz Steel‘s challenge, and I sketched more frequently than I ever have. Learning to let myself experiment with my drawings, let my lines be looser and fortunate mistakes to happen has been a revelation that I plan on exploring more in 2018.

I journaled each day for most of the year, and finally started filling all those notebooks I bought. 2017 was also the year I fell in love again with Moleskines, but more on that perhaps later.

I challenged myself to take a photo a day, and succeeded, and I plan on continuing with that challenge in 2018. It makes me stop, look around, think about composition, lighting, atmosphere — all things that are valuable to me both as an artist and a writer.

2017 wasn’t without it’s challenges, fears, troubles — but it was also full of triumph and hope, good things that I plan on carrying on with me to 2018 and beyond. 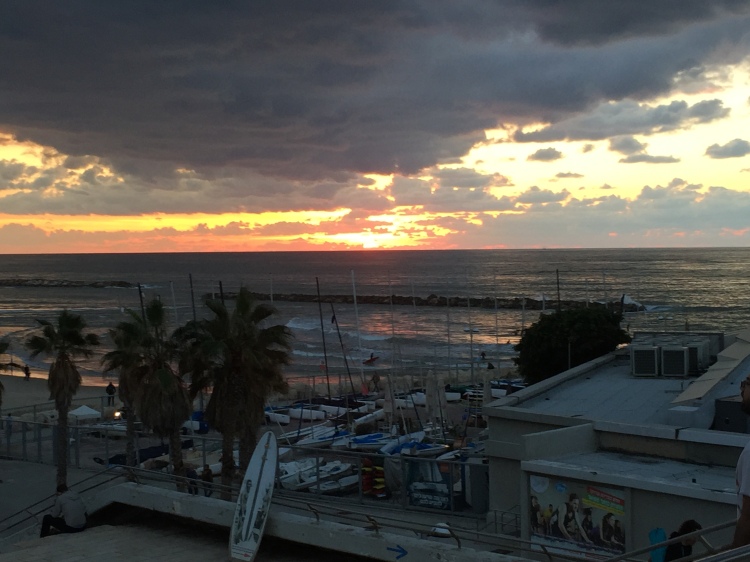 I accidentally broke a clothing pin today, and instead of immediately chucking it to the trash, I decided to play with it for a while. 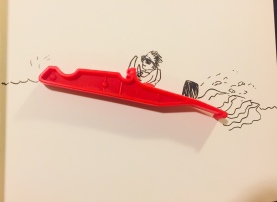 … I didn’t feel like going for my scheduled 5k because it was hot, and I spent most of the day on my feet at a friend’s wedding, so I was tired and pretty sore. But I dragged my ass to the gym, put in my 5k (I hate treadmill runs), and was rewarded with this view on my way back:

There’s never a run that’s not worth it.

Yesterday I crossed the 2000 km milestone since I started running (~360km done so far this year). Running was literally a pain in high school, a horror in the army and something I never, never would have thought that I’d enjoy. Almost 6 years ago, on a cold November evening I laced up a proper pair of running shoes that actually fit my needs (I have flat feet), and went on my first run/walk. I haven’t looked back since.

Several things didn’t go as planned this week, as I had a few unforeseen schedule changes, a bit of bad luck with my running, and a pretty bad day at work near the end of the week. As a result, both my running and my writing suffered (I missed a writing day and my long run is going to be 6k instead of 10K).

So what do you do when things don’t go entirely as planned?

Get back on the horse — so you missed a day, or didn’t make your daily word count, so what? Projects that are worth doing don’t live and die on a day (looking at you NaNoWriMo), but on accumulated body of work done over several weeks, months and years. Do you know what is entirely unhelpful to achieving that work? Getting so caught up in you missing a day that you decide to give up entirely. Get back on the horse, get back to fulfilling your daily goal today instead of fixating on what happened yesterday. .

Focus on what did happen — in my case, my reading this week sky-rocketted, and I spent more time with my family. That doesn’t make up for everything else, but it is something positive that I’m glad happened.

Check what went wrong and when, and see if you can learn from it for the future — were you too ambitious? Do you need to rework your plan to account for something that you couldn’t foresee when you first built it? Don’t make excuses, but do be honest and make some changes if necessary.

Leave enough ‘breathing room’ in your schedule for these kind of off days — this was my biggest mistake, and the one is going to be hardest to fix, long term. My running schedule can (still) suffer a few delays, but I’m prepping for a race in the fall, and I can’t really afford to leave things like my long run for the evening of the last day in the week. Earlier is better, and making sure that your goals are achievable even if you aren’t at peak performance is important — especially for endurance sports like running and novel writing.

Now if you’ll excuse me, I’m going out for a run.

Starting to write is like starting to run. Your brain starts playing tricks on you from step one.

“It’s too hot today — it’s dangerous to run outside”.

“My feet hurt, my head hurts, my throat hurts — let’s not go out today”.

I sat down to write yesterday, and it was difficult, very difficult to start. My mind started wandering, suggesting that I read my twitter feed, or the NYT, or do anything, just anything but write. It’s like that almost every time I sit down and write, and the only way I found to overcome it is to map out reasonable daily goals and force myself to start anyway. Usually when I start writing I can push myself well enough to the finish, sometimes even a bit farther. The same thing happens when I run — the first 2-3k are a pain, but then I get into the rhythm, and start enjoying myself.

There’s never been a run that I’ve regretted.

There’s never been a writing session that I’ve regretted.

I just need to remember that when the tiny little coward in my brain decided to protest.

Super busy week at work, which means that I’m doing more overtime than I planned. This translates to less writing time, I’m afraid, but it is still better than nothing. The first sufferer will have to be this blog, because my fiction writing takes precedence over almost everything else these days.

I have finished the basics of my touch typing course and am now simply touch typing, improving my speed, and making sure not to fall into old habits (such as typing with only a few fingers, or glancing every now and then to my keyboard). I have learned to dislike QWERTY, but I’m not yet certain that I want to start learning Colemak at this point.

Anyway, here are a few interesting and useful links that I have gathered over the week:

One Paragraph, Three Drafts – author Diane Chamberlain goes over her (re)writing process using a single paragraph. I find it interesting to watch authors go through their revision process, especially since so few of them are willing to reveal it.

Why Your Attention Span is a Great Excuse for Someone Else’s Failure – a fresh look on some recent eBook (not) reading trends statistics.

Henry Miller’s 11 Commandments of Writing and Daily Creative Routine – short, powerful, succinct words of advice from the author of Tropic of Cancer.

I had a super productive day today.

I managed to write double my daily word quota (I wrote 1,067 words today), figure out a problem I had with one of my characters (what is his motivation in a certain scene), complete my basic touch typing training, run my Friday errands, and go for an actual run.

Earlier this week things weren’t so great. I was stuck with one of my characters (what is his motivation in a certain scene?), and I had a very demanding week at work, which translated to me really, really struggling to complete my word quota on Tuesday and Wednesday.

Some days are better, some days are worse — it all evens out in the long run. I just need to remember during the rough patches that I am are running a marathon, not a sprint, and I will be alright.

Speaking of podcasts, Ira Glass, the talented host/reporter/producer/storyteller of This American Life, did an interview a while back on storytelling.

Well worth your time, the interview can be found here:

An audio only version can be found here:

Ira Glass On Anxiety, Fame, and the Early Days of This American Life (part 2)