Today is national pencil day, which is just an excuse to showcase my latest vintage pencil finds from visiting a very old local stationery shop. Oftentimes shops like these still have new old stock of vintage pencils, and in my case I’m usually looking for local Jerusalem Pencils, but I often find other interesting things along the way.

In this case I got a very large haul of Eberhard Faber Mongol #2 pencils, which I think are really good looking in terms of typography and ferrule design. Most of them are unsharpened, which is a bonus treat, although as usual with vintage pencils time has rendered their erasers unusable.

The real find for me were some very old Jerusalem Pencils (based on the logo), in this case coloured pencils (black and red). These are very waxy with relatively little pigment, but I don’t intend to draw with them anyway, and it just tickles me that didn’t translate “sunset” to “שקיעה” (or sunset in Hebrew) but rather chose to transliterate it, to give the pencil a more cosmopolitan feel.

Carpenter pencils are something I rarely find in stationery stores but do sometimes find in flea markets. In this case I lucked on three perfect Jerusalem Pencils Carpenter 199 pencils.

Even rarer for me are these Jerusalem Pencils Office 46 red and blue dual pencils. One of them is badly warped and another is slightly warped, but they still have their handsome imprint with an art deco-y font.

These are more modern, as they have the Pan Art imprint, which means that they were likely made after Jerusalem Pencils was forced to rebrand itself after its bankruptcy. They’re charcoal pencils, and it will be interesting to give them a spin. I love the font selection here as there’s a lovely flow to it.

These are the last Jerusalem Pencils of the bunch, Pan Art coloured pencils from the 1000 and the Al Greco 6000 line. These are quite modern but I still haven’t seen them too often so I added them to the pencil pile.

Here’s a pencil that I’m pretty sure was made by Jerusalem Pencils, but there’s no telling it if was under that name or Pan Art. It was sharpened at both ends so you can just make out that it’s an HB pencil, and enough of the imprint is left to know that it was made in Israel and is called Oriole.

And here we enter the realms of the unknown pencil brand, where I just bought pencils for their imprint and style, such as this Patented Drawing “Liberty” pencil:

Which was made by the Pai-Tai Industrial Co LTD.

These Student 101 pencils from a Croatian company called TOZ Penkala (thank you to a penaddict slack user for helping me with this):

These L&C Hardtmuth Studio 941 7 and 18 pencils that just have the best imprint font and logo:

These Marco 4100 coloured pencils which I bought for the Comic Sans “Superb Writer” imprint, it made me laugh.

And these random pencils all bought for their imprints: Springer, Factis “Eraser Pencil” 3012, and Warm Heart Color Pencils.

Of all of these I’ll probably only be using the Mongols, but I find having the others fun, and I may be able to swap a few of them for some other vintage pencils that I can enjoy.

It’s National Pencil Day and I decided to celebrate. Last year I picked up some vintage pencils in a stall in Spitalfields market in London, and they’ve been languishing unloved in their box ever since. The truth is I felt that they were too pretty to sharpen and use, which is both understandable (I mean look at them!) and silly. Pencils are meant to be sharpened, period.

So I broke out the “Corgie” (à Paris) 907 pencils, which are natural pencils coated with a thick layer of lacquer that makes them both shiny and satisfying to hold. The French appear to be more restrained in their choice of imprint fonts, but they go all wild when it comes to the wrappers around the pencils. Behold, creativity let loose: 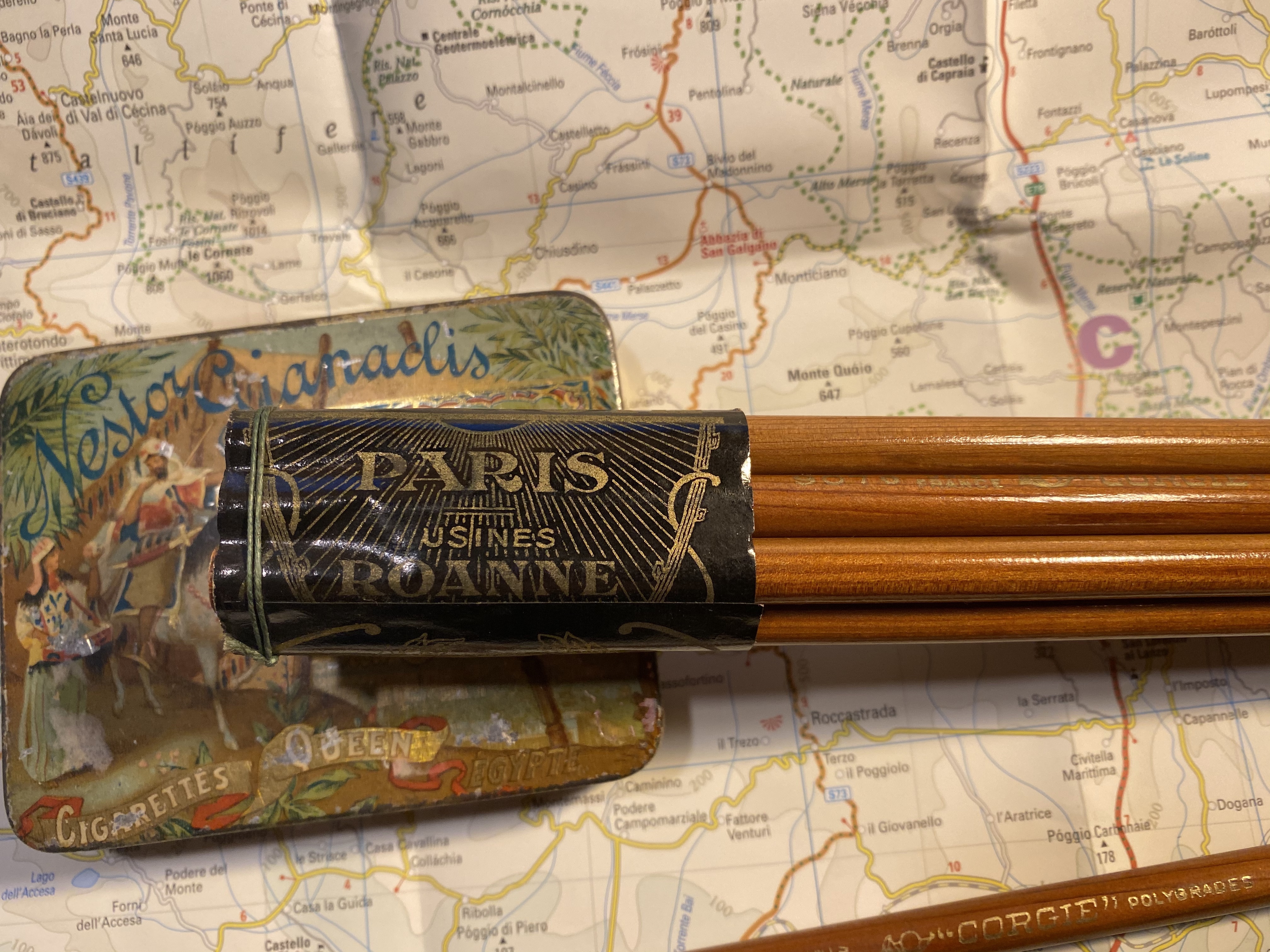 Here’s the imprint (it’s hard to photograph, as the lacquer gets in the way. There are basically two fonts in use, and a very charming bugle logo. The Corgié à Paris factory was active from 1923 to around 1986 (thanks Brand Name Pencils) and if I’d have to venture a guess I think that these are from the ’60s, but it’s really hard to tell.

The grain on these pencils is fantastic. Just look at that:

Unlike some vintage pencils whose wood has dried out and become brittle with time, the Corgie 907s sharpen like a charm. They’re not very nice smelling (they just smell old), but there’s nothing to complain too much about.

These are No. 0 pencils, which makes them about 2B-4B, depending on the manufacturer. They’re soft and dark, and a joy to draw with, although they don’t hold a tip for very long. The graphite does smudge, but it doesn’t crumble, and there’s a good amount of feedback while using them. Here they are with some Faber-Castell Albrecht Dürer watercolour pencils in use:

Go sharpen a pencil, and have some fun drawing or writing a little something for yourself. 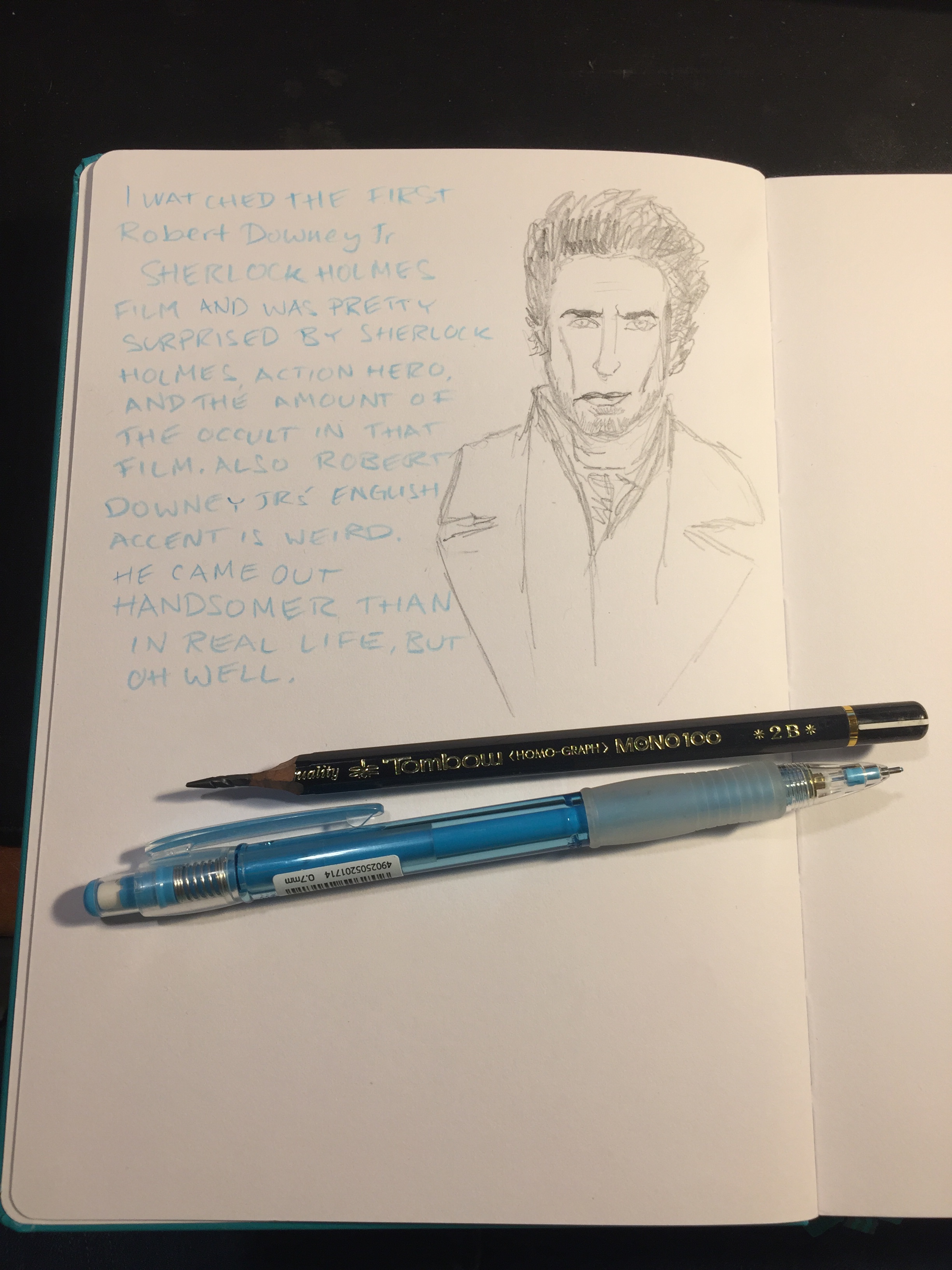 A lucky find in the Jaffa flea market, three pencils and one coloured pencil made by Jerusalem Pencils, likely in the 70s or maybe the 80s, for the IDF.

I drew this on a small paper bag with Koh-I-Noor Tri Tone coloured pencils set. Scenes from the Tel Aviv Port market, drawn during an Urban Sketchers sketch walk.

I like old tins, and this one is one of my favourites, because of the sheer amount of fonts packed into such a tiny box. 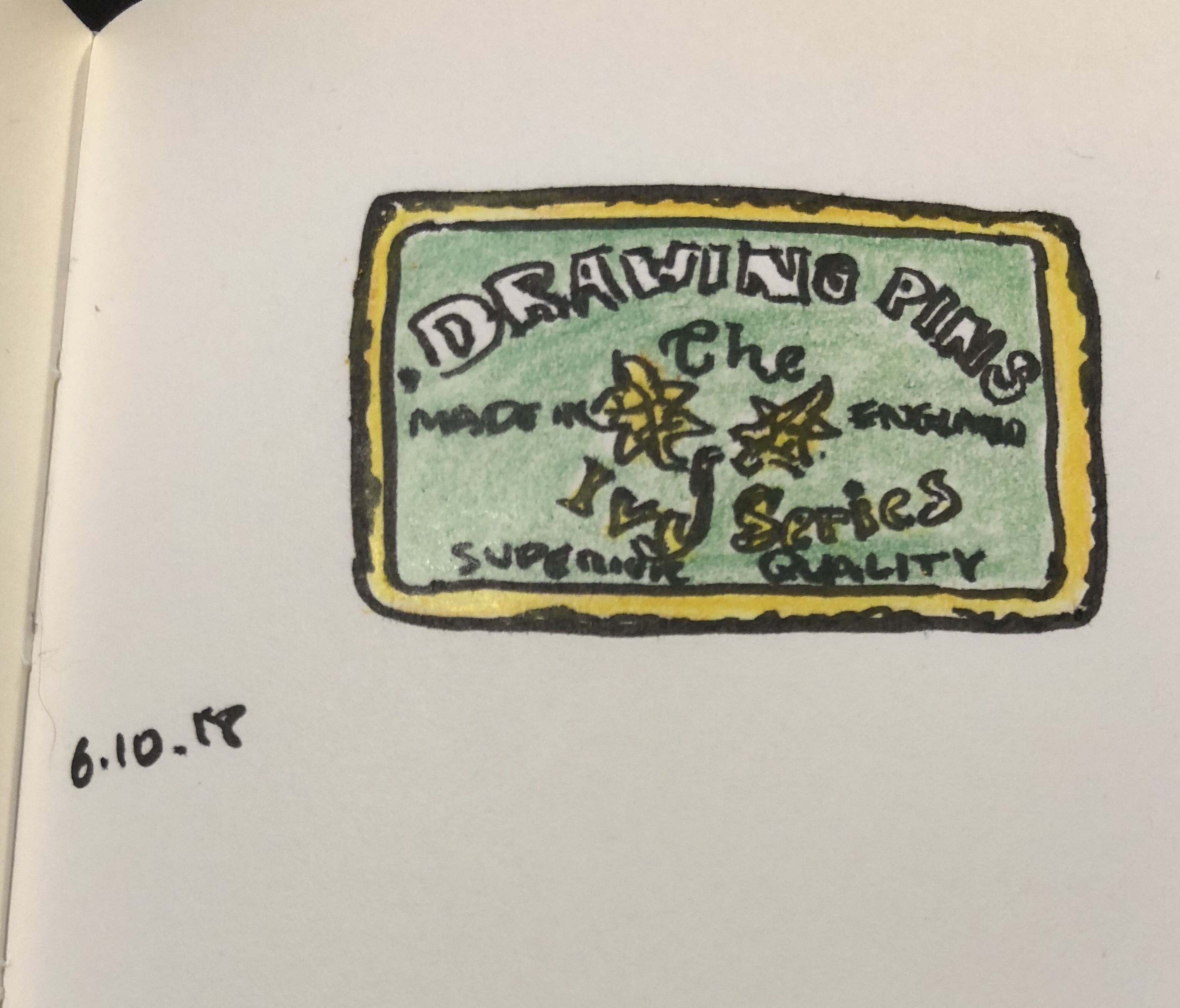 I just received a pack of the Field Notes Signature blank page edition and noticed that on the front of the band it said,”Sketch Book” right below the “Plain Paper”. I opened it up and saw that unlike my beloved Dime Novel edition, these notebooks had no page numbers (a plus for me) and their pages were white and not cream coloured. That made me decide to break them out for a very quick sketching opportunity, to see how well they faired.

The notebook doesn’t open flat, and it tends to want to close on itself, so I used a clip to keep it open when I was sketching. Ideally you’ll need two clips and maybe a backboard of some kind to use it comfortably. The paper, as is normal with sketching paper, doesn’t take washes too well. It’s relatively thin and it buckles pretty easily, so only the lightest of washes should be attempted with it. 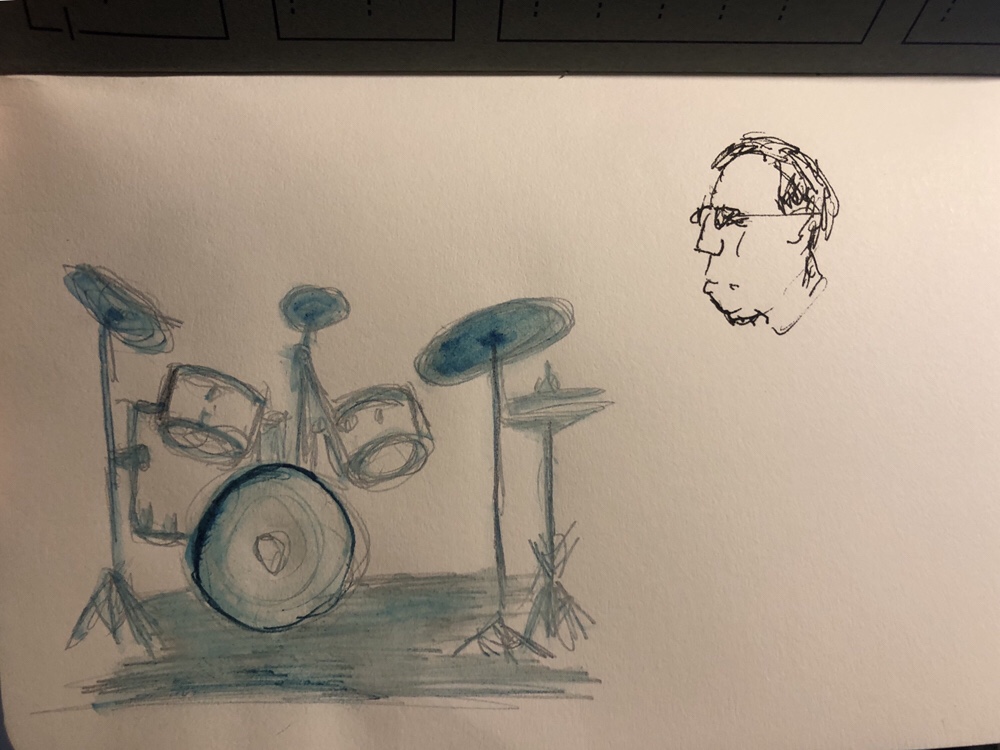 The drum set above was sketched with a Sanford No-Blot Pencil. You can see the paper buckling even though very little water was applied with a water brush.

A tiny bit of spread when you lay down the ink too thickly: 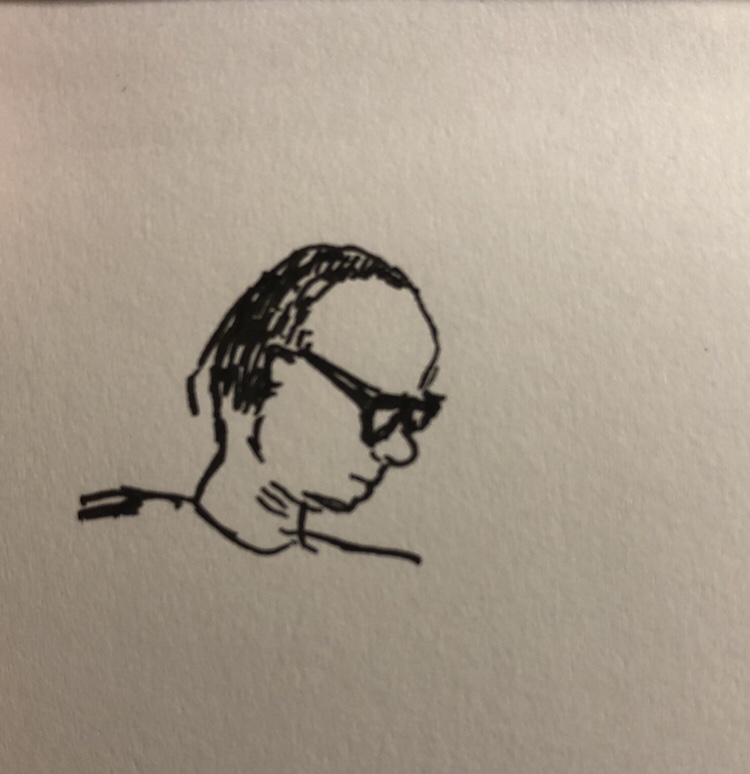 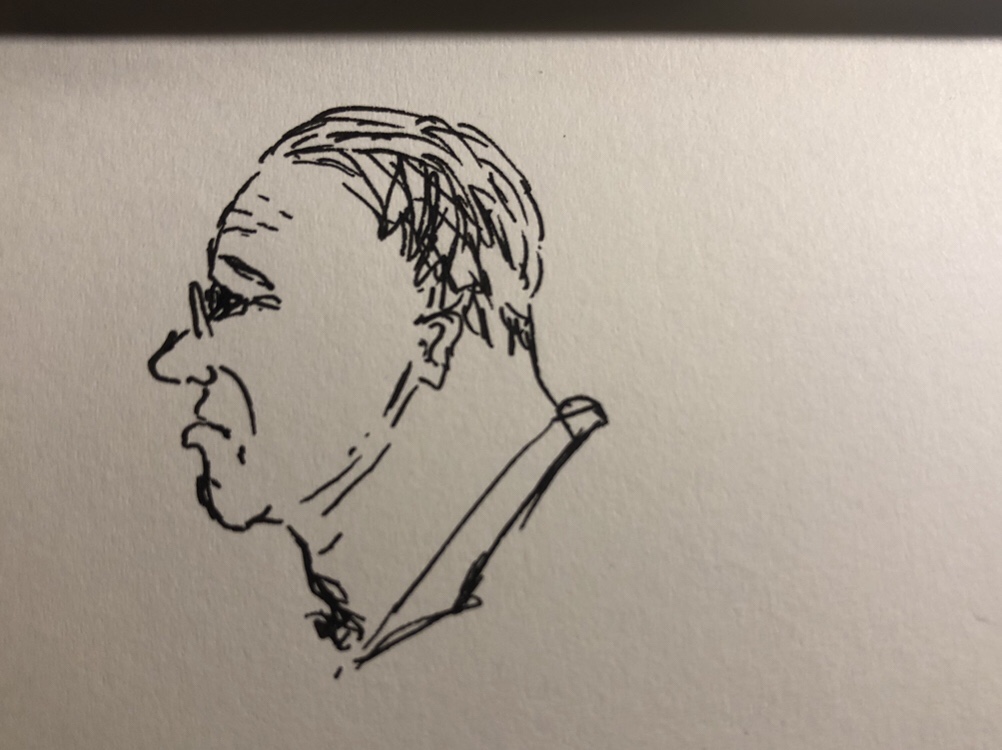 Zero complaints when it comes to pencil sketches:

As is to be expected with this kind of paper, it works well with pencils and coloured pencils, having just enough tooth to make it work well with them, but not so great with fine and extra fine fountain pens and thin technical pens.

As you can see above, the Extra Fine Waterman Phileas (with Colorverse Selectron pigment ink) stuttered on the page.

The Signature also suffers from being an awkward size for a sketchbook: too large to be truly pocketable, too small to allow for anything more than tiny, quick sketches.

As a sketchbook, I’d not recommend it. There are better options in the market, ones that open flat, in better sizes, with hardcovers (a plus when sketching on the go), that take washes a bit better than the Signature does.

That being said, it’s a fountain pen friendly Field Notes, and so long as you’re not set on using nibs that in the extra fine realm or using this notebook as your main sketchbook, it’s a nice little thing to carry around and play with. There’s nothing wrong with a notebook that can take a little doodle next to your todo list…

Tonight’s D&D game, the first of the year, featured a group of card playing skeletons (that whooped our ass with table legs), a fog spewing magical wooden chest, and a blood thirsty cursed flail that’s our fighter’s new best friend.

A session to remember.