Our D&D group found itself next to a colossal sleeping white dragon, and one of the characters suggested that we could take it on. I grabbed my Blackwing (811) and created a quick illustration of relative sizes to emphasise just how crazy that idea was.

We didn’t attack the dragon.

It’s the insane, glow in the dark Blackwing, and I managed to snag a box!

OK, enough with the hype. Plenty of other reviewers have given this limited edition pencil a spin, but my experiences and thoughts about “The Library Pencil” seem to be different enough to warrant a few quick words about the Blackwing 811.

First of all, the pencil is attractive. It’s darker than a banker’s lamp (I have one, so I checked), and the gradient is very well done. This could have looked cheap and tacky but it doesn’t. I would have liked a darker ferrule and I think that the pink eraser is ugly, but even so it’s a pretty attractive pencil. 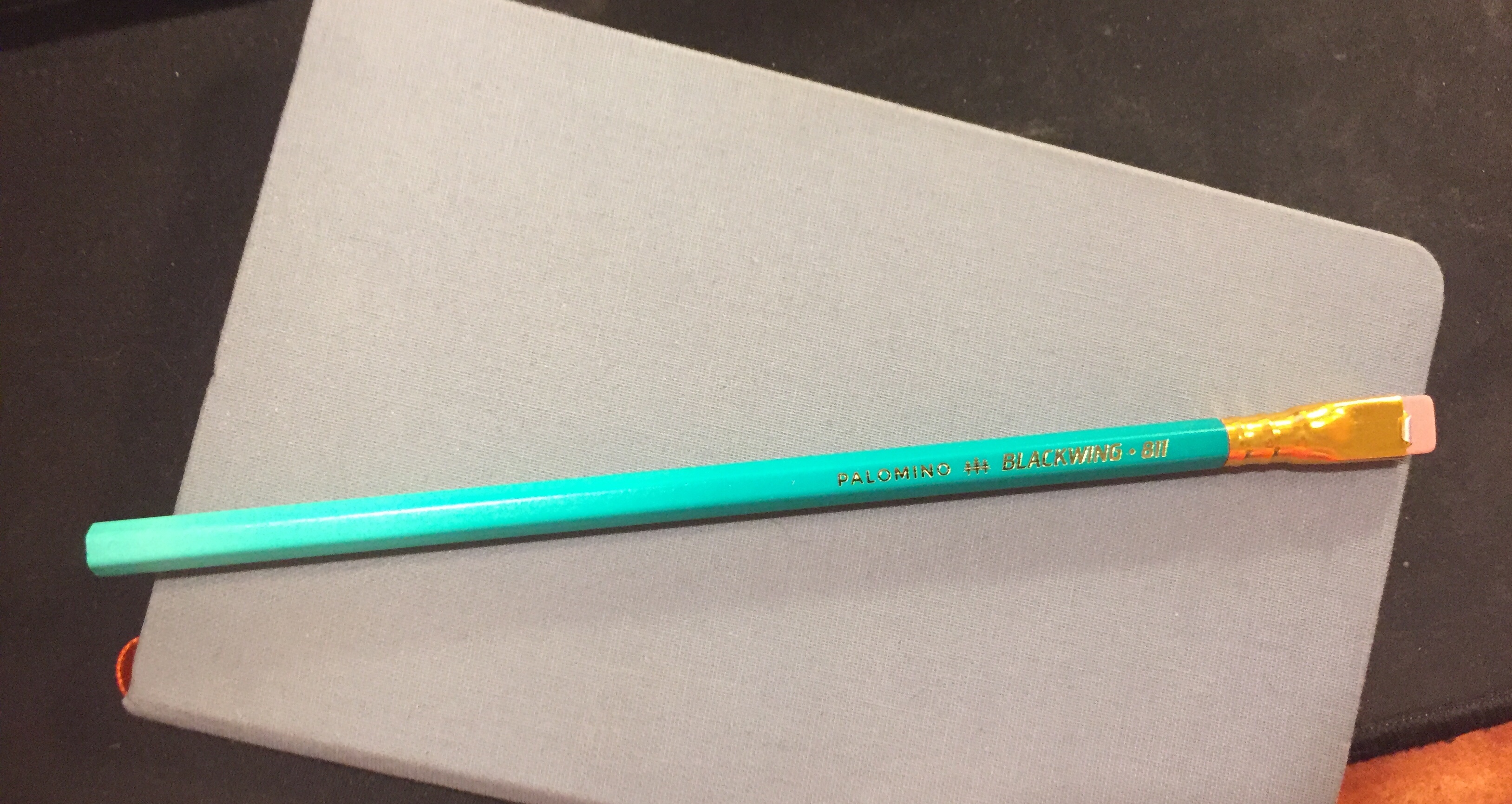 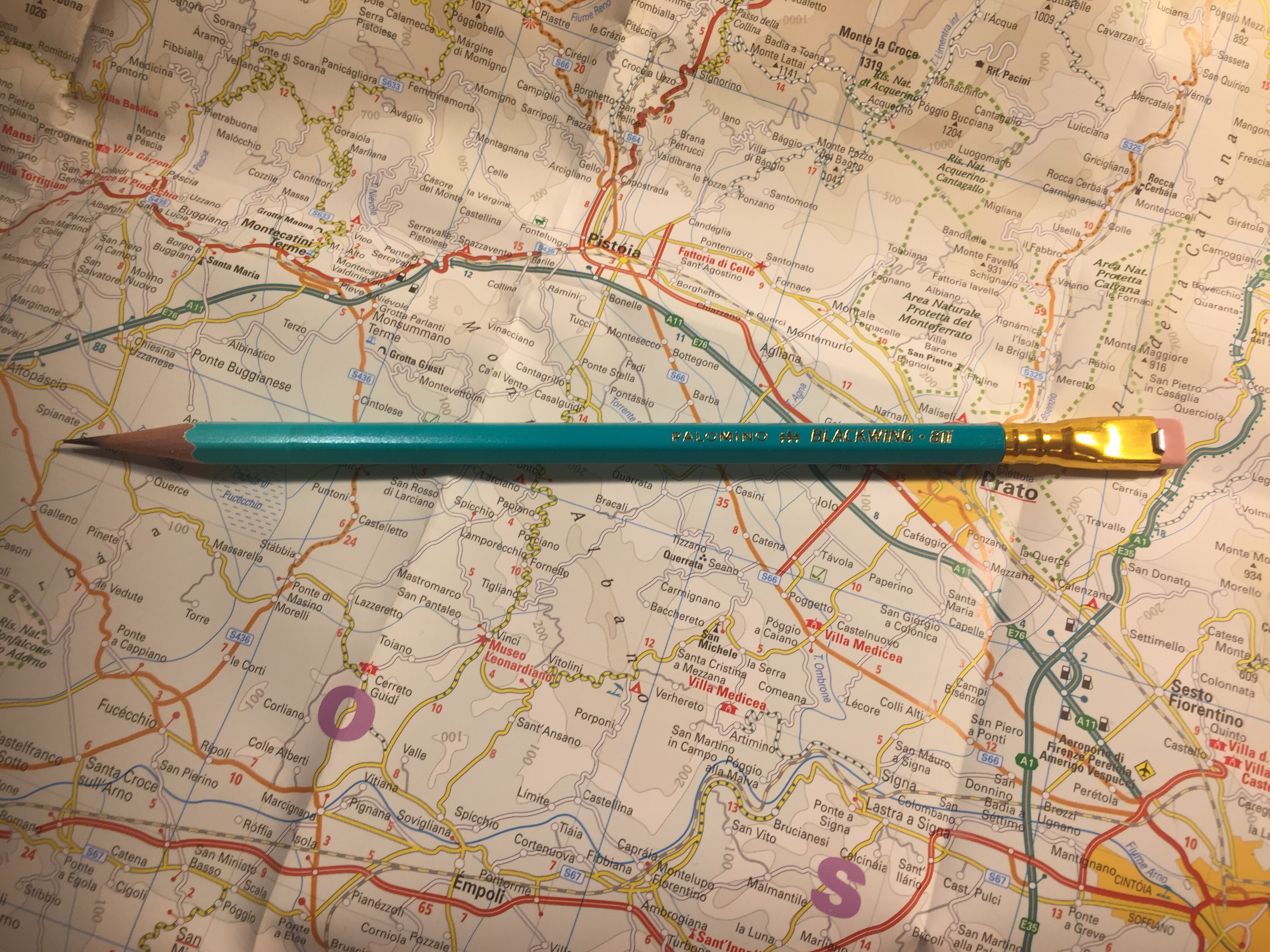 It’s got a “firm” core, which means it has the Blacking 602. I absolutely hate that Blackwing doesn’t write its firmness on the barrel, or use “standard” hardness ratings, or makes it easy to see what the core grade is on the box or on their site. That’s like buying a fountain pen and not knowing whether you’ll get a fine or a broad. It’s bad enough that manufacturers play fast and loose with pencil grades within the standard 10H-10B range. Having a company invent its own grade and not even have it make sense, and then not even make it visible is a big no-no in my book.

Here’s a sketch of my banker’s lamp (which is a bit wonky after my cat dropped a giant pile of books on it) done with the Blackwing 211. I’d say it’s a B or a 2B, depending on the maker, but in no way is it a pencil that I’d call “firm”. It’s great for quick sketches, but I wouldn’t recommend it for under-drawings.

Continuing my “how I use the stuff I have” posts, I thought that I’d show how I use pencils when I’m working on a series of portraits of the same person.

Since I work in watercolour which is notoriously not great for correcting and changing your mind mid painting, when there’s a face that I know that I’ll want to explore I usually create a “construction” sketch which I transfer to paper several times. I can then paint the portrait in different tones, or focus on a certain aspect that interests me, or take it to really wild places without spending too much time on the technicalities of the preliminary sketch.

I start the “construction” sketch on newsprint paper. It’s much more detailed and “searching” than it needs to be, but that doesn’t matter much. Ultimately only the lines that will help me construct the face and note where the major light and dark transitions are will remain. I draw this with a Faber Castell 9000 2B or 3B pencil that’s sharpened with a pocket knife to allow me to use it without having to pause for sharpening. Newsprint paper is pretty transparent and also generally too fragile for regular erasers, so I use a kneaded eraser to lift off unnecessary lines, or simply ignore them.

Once I’m done with that, I flip the page to the other side and scribble on it with a Faber Castell 9000 6B or Palomino Blackwing MMX. These are again sharpened with a pocket knife, and the point is to get as much coverage as possible. If I’m doing a lot of transfers then I might have to repeat this process, adding more graphite to the back of the sketch.

I then transfer the most important lines in my sketch on to a piece of watercolour paper. This is done by placing the newsprint paper with the sketch over the watercolour paper and going over the lines in the sketch with a 2H pencil (I use a Faber Castell 9000 2H, but this isn’t that important). The pencil needs to be a hard pencil for the lines to transfer to the paper below, but it can’t be too hard or too sharp or it will rip the newsprint paper. It’s also important to put just enough pressure when you’re tracing so the graphite on the underside of the sketch transfers to the paper, but not too much to bruise the watercolour paper. Using a 300 gsm watercolour paper helps protect it, but it’s mostly a matter of practice. When you’re done you get something like this: 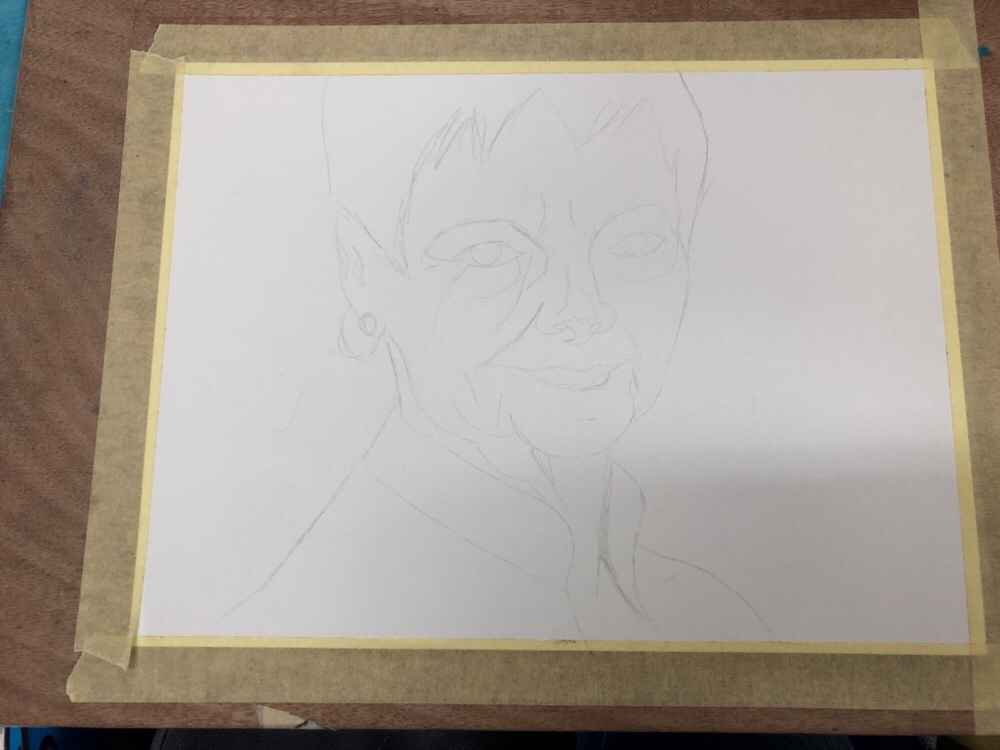 The lines are pretty faint, which is great when working with watercolour, because they don’t distract too much from the figure once you start working.

I created about five watercolour portraits of Dame Judi Dench from this sketch so far, and there’s a good chance that I’ll go explore her some more in the future.

How I Use Pencils in Watercolour Portraits

I wrote the first few chapters of my first novel longhand, with fountain pen on loose sheets of A4 tomoe river paper. As I realized that I would have to type everything into Scrivener before I could even start editing, the lazy programmer within me balked. It was fine doing this with quick drafts, but writing an entire novel longhand was not for me.

I still use pen, pencil and paper a lot in my writing though. I use a fountain pen (anything that doesn’t have a flex or novelty nib will do — from extra-fine to 1.1mm stubs) and loose sheets of A4 and A5 tomoe river paper to work on my outlines, for quick drafts, to test plot options out, or when I’m really, really stuck in my writing. A Field Notes Byline is constantly under my keyboard, horizontally. Yes, I know that the lines don’t go that way, but I ignore them. The form factor is perfect for that, and the ruling is pale enough for me to easily ignore it. I use a Blackwing 16.2 or 24 with it, to quickly capture any ideas that may come up during my writing, to remind myself where I was going with an idea or what I need to fix a previous place, to brainstorm names, etc. It serves as a scratch pad that allows me to maintain my writing flow and still remember things along the way.

So, even if you do all your writing using Ulysses or Scrivener (hopefully not Word), I recommend that you incorporate some analogue tools in your process. You’re bound to find them useful, particularly when you’re stuck or you’ve dug yourself into a hole.

I did not like the Blackwing 530 when it came out (too much bling for my taste), but now that pencil that I’ve been using has gotten worn down and dinged a bit an underpainting of verdigris has been revealed, and I love the effect. It’s just a little reminder that I should give things a chance even if I didn’t fall in love with them at first glance (also this pencil is super difficult to photograph, because of the bling, so forgive me for the potato quality photo).

Some pencils keep getting better

Watched the 1st “Iron Man” movie again today, and I forgot how funny it was. 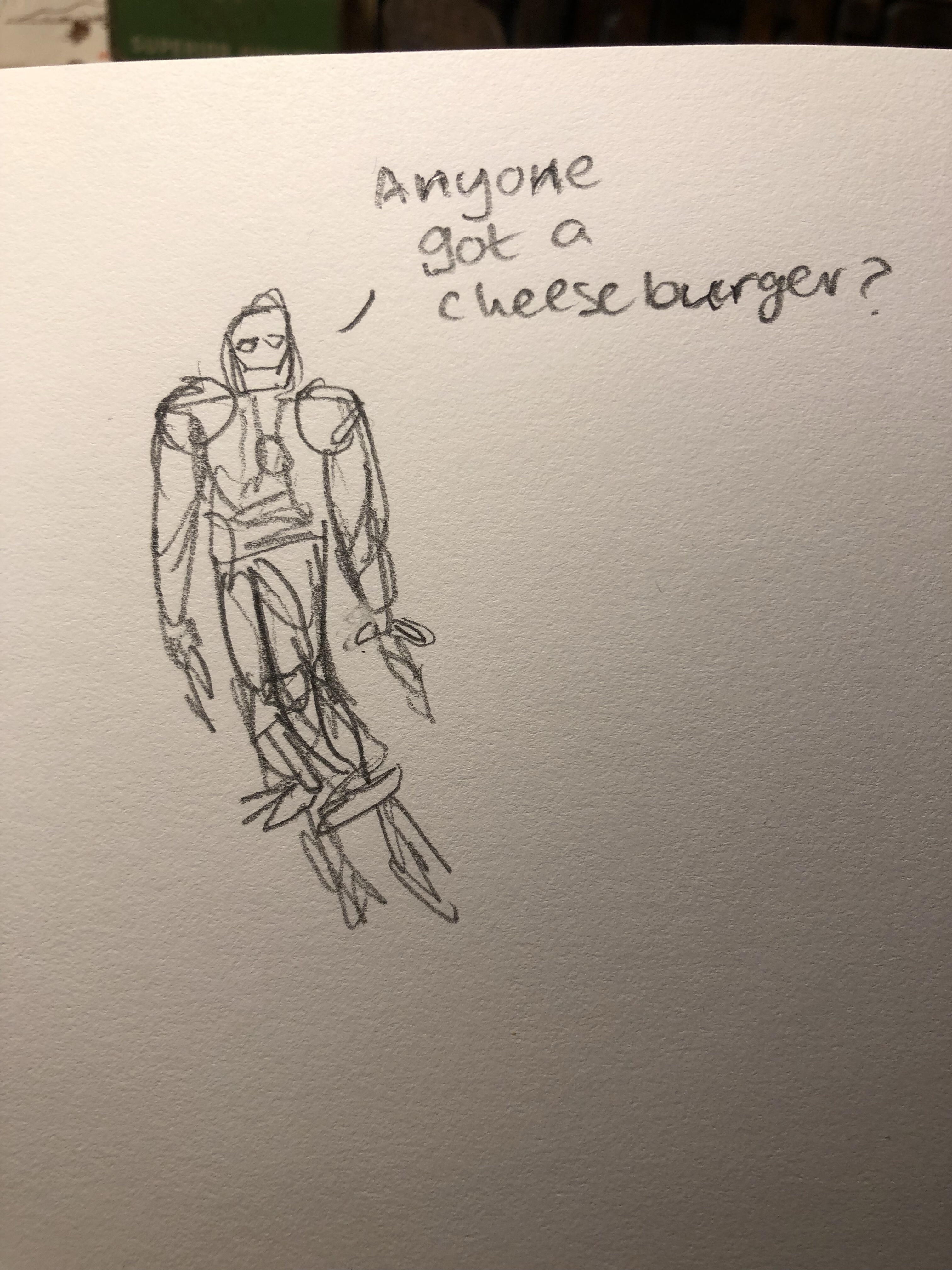