I planned to review the Sharpie brush pen, after spending the best part of a week with it, but as it turns out, I forgot it at the office. I’ve been using the Pentel Fude Touch Brush Sign Pen instead, so here’s a review of this boring little brush pen instead.

Today’s journal comic/review, drawn on a Moleskine Star Wars crawl text blank notebook. This paper is smooth, although not Rhodia smooth, but the pen still really dragged on it. It was worse on any sort of paper with even the slightest tooth, making it super not fun to use.

The brush pen tip is pretty firm, which means that you get a medium amount of line variation, but that it’s very easy to control. If you’re starting out in the wild world of brush pens, either for drawing or lettering, this tip grade is probably the best for you.

The pen body itself looks and feels cheap and plasticy, which isn’t too unusual in the disposable brush pen market. Why do all these companies have a thing for a dark pen body with pronounced gold lettered marketing splashed all over it? Pentel’s also put sparkles in its, body, just for some extra garish fun. 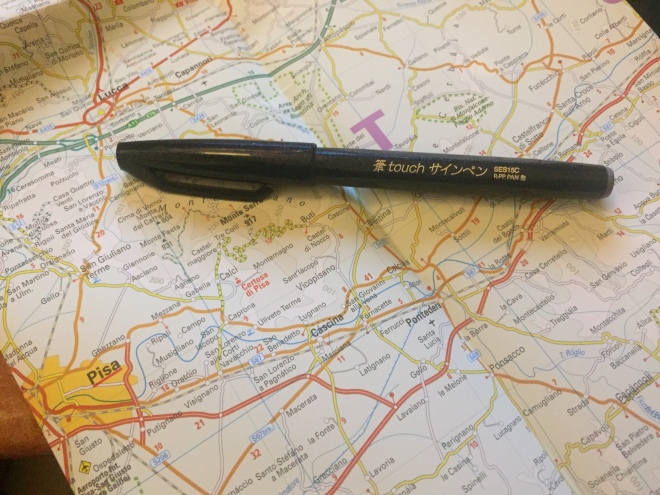 The pen is torpedo shaped with facets along the body that somewhat help keep the pen from rolling. It’s borderline too thin to use for long periods of time without cramping, but  otherwise it’s comfortable to hold and use.

The Pentel Fude Brush Sign Pen would be a good beginners’ brush pen if there wasn’t so much competition at the same price. As it is, buy a Zebra brush pen, which allows for greater line variation, or a Kuretake brush pen, which is also waterproof, or add a little more and get the experience of two brush pens in one with the Pilot Futayaku. As it is, this Pentel pen lacks enough line variation to make it fun and interesting to use, and it isn’t cheap enough to justify buying it over the competition.