I tried to get my hands on the Timex X DDC Scout watch designed by Aaron Draplin for three times before I managed to snag one. They are sold out so quickly that if you want one you really need to set an alarm and be quick with your keyboard and mouse. Then our local post office tried to do a vanishing act with my package, but finally, a month after I ordered it, I got my hands on this orange and black beauty. I only use analogue watches, usually Swatch watches (in recent years it was System 51 Swatch mechanical watches), but I’ve never owned such a heavy watch. It took me a day to get used to it, and since then it has been my constant companion. It is a beast of a MACHINE but an eye catching one, and I couldn’t be happier with my purchase. I highly recommend getting one, if you have any interest in watches.

This page was created as part of Liz Steel‘s Sketchbook Design course and is all about the white space.

This page, created for Liz Steel‘s Sketchbook Design course, is about secondary sketches and borders, and has a little hidden colour block in it. The original spread was a little lacklustre and disjointed. The Viennoise in the corner looked particularly sad. Adding a secondary sketch of the Maison Kayser bakery (where I bought it), with a touch of blue and bluish grey to the background really brought it to life.

I’m enjoying the course very much, even though the past two weeks have been personally hectic. I’ve been working on a short story to submit to a competition (got it done in time and accepted), and some bad news regarding the health of a family member have meant less sketching time than I would have liked. Hopefully the coming weeks will be better.

By the way, the local branch of Maison Kayser, in Tel Aviv’s port (I haven’t visited the Rothschild one yet), is excellent. Their vanilla chocolate chip danish, sandwiches, and baguettes are sublime, and it’s a fun place to visit. They had the misfortune of opening after the pandemic started, but they seem to be managing well, so I think we’ll be seeing them around for a good while yet.

The first week of Liz Steel’s Sketchbook Design course is underway, and so far I’m having a blast and drawing much more than I used to. I’m also learning a lot not just from Liz, but also from the other participants in the course. One of exercises this week was to create a page with our Sketchbook Design course goals, and here is mine. I also drew the Phoenix Community Garden in London’s West End to accompany my goals. Hopefully I’ll be able to return to it later this year. 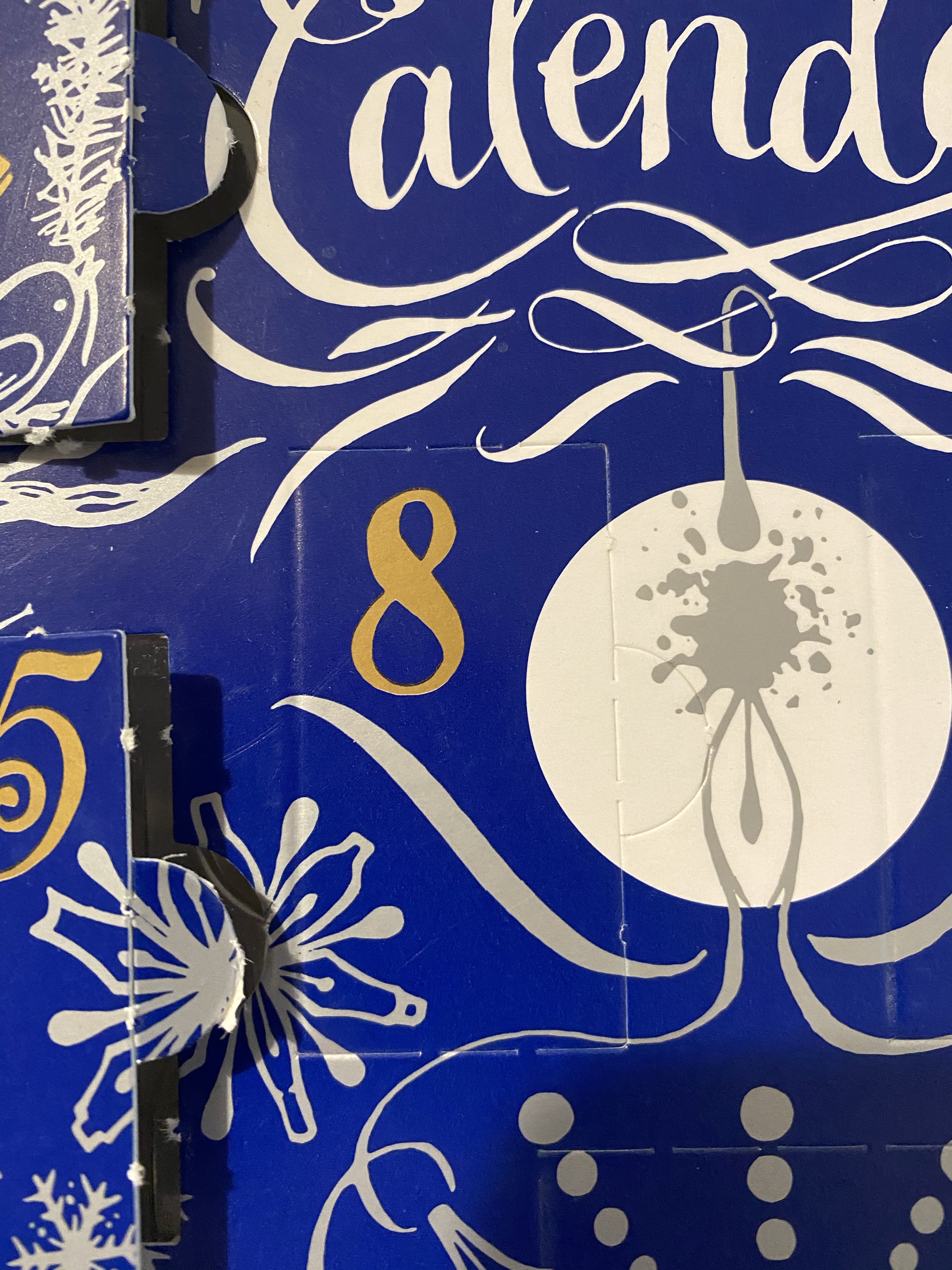 I was expecting something with a little pizzaz for day 8, and Diamine didn’t disappoint. Get ready for some bling… 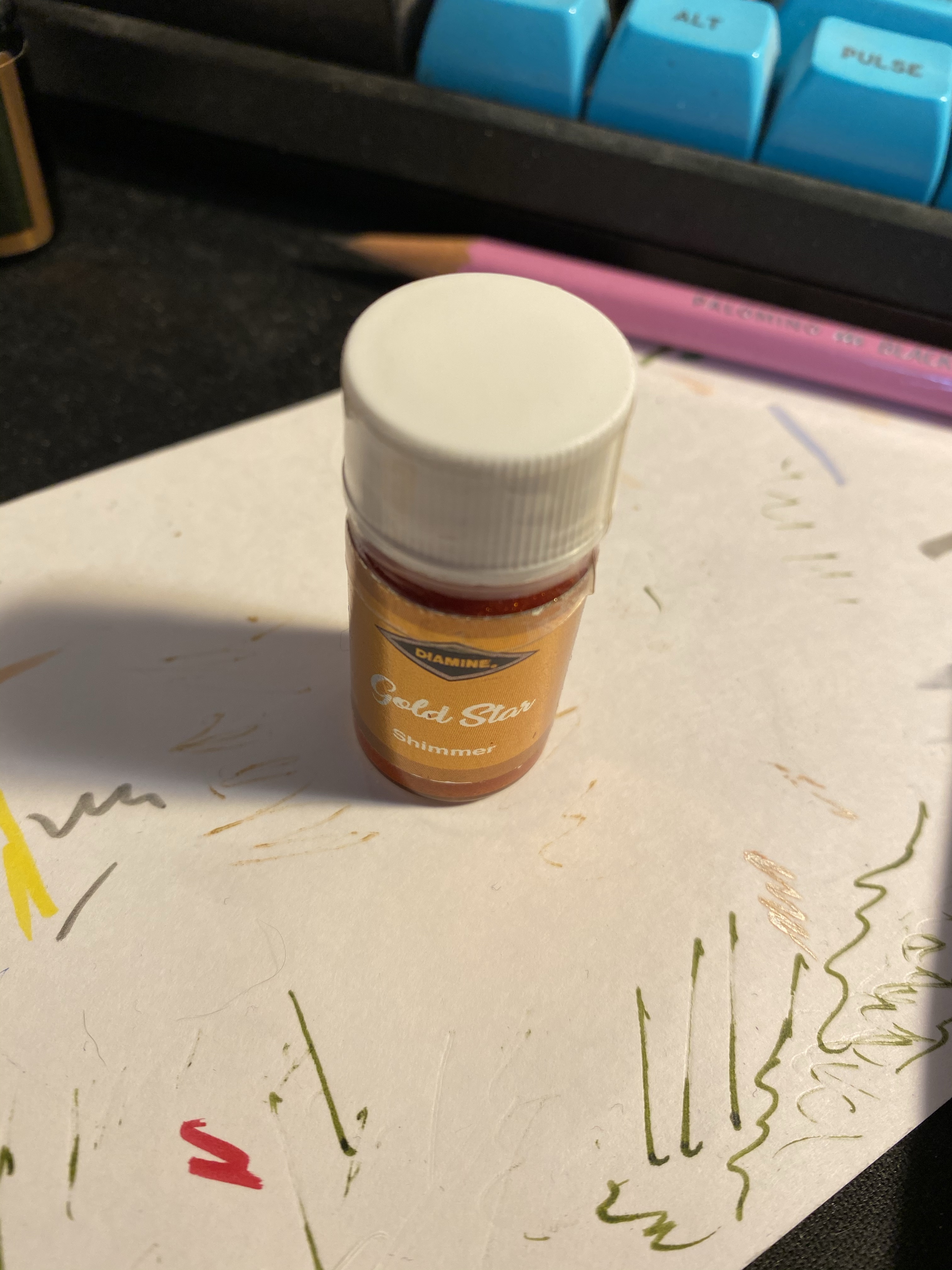 Diamine Gold Star is day 8’s ink, and calling it a shimmer ink doesn’t do it justice. I’m pretty sure that Diamine took their Sunshine Yellow ink and poured ALL OF THE GLITTER into it. The result is phenomenal.

Even after shaking the ink for a bit, there’s a ton of particles that sink to the bottom of the bottle.

This means that you have to really shake it well before filling your pen, and then shake your pen before use to get the full Gold Star effect. As it is, this ink is beautiful, because it shades so much. A wide nib and Tomoe river paper really make it shine (pun intended):

Even on Clairefontaine paper the shading and shimmer of this ink make it stand out:

This ink is wildly inappropriate for office use, but it’s so great for holiday cards, especially if you couple it with Diamine Snow Storm. Needless to say, Diamine Gold Star isn’t going anywhere near my vintage or more expensive pens, because I’m terrified of the amount of glitter sediment that I can see in the bottle.

I’ve been eyeing the Lamy Studio for years now, but until now I haven’t purchased one because I found the available colours kind of boring and drab. Then they came out with the Terracotta limited edition, and I decided to give it a go.

The Lamy Studio Terracotta is a full metal bodied pen, and so it has some heft to it, although it’s nothing close to the weight of a Karas Kustoms Ink. Even if you have a small hand, the weight of this pen shouldn’t be an issue.

The colour of the pen is vibrant, and the matt finish on the pen practically glows in the light. 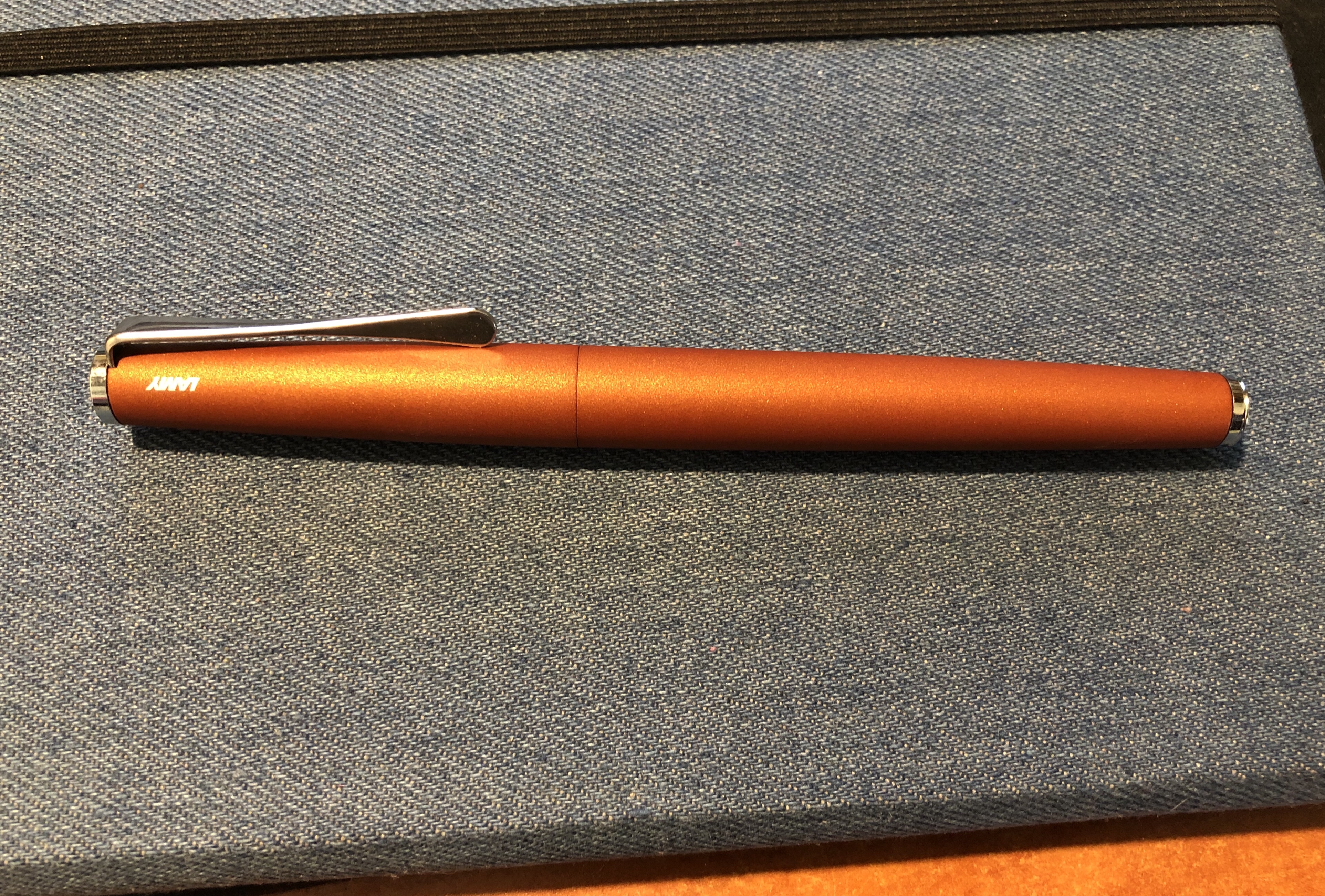 This fountain pen is famous for its propeller-like clip design, and it’s nice and functional but not something you notice after a little while. The Lamy 2000 and the Lamy Safari have much more striking designs.

The Lamy Studio uses the same nib units that the Lamy Safari uses, and the same converters too. The pen arrives in a beautiful, super sized box that makes for great gift packaging, complete with an ink cartridge and a converter.

The main issue with this pen is its grip. As you can see from the photos, it’s a shiny, slippery metal grip. That’s a problem, especially if you tend to sweat, or if you use hand cream. It’s not that the pen slipped when I wrote with it, but as my fingers had no real purchase on the grip, the pen felt insecure in my hand. Like it was going to fly out of my grip at any moment. That doesn’t make for an enjoyable writing experience.

As I was taking photos to try and get the colour of this pen, it rolled away (uncapped) and fell to the floor. The nib got slightly dinged, but I straightened it pretty easily. Even if it would have been badly damaged it would have been no big deal as I have plenty of Lamy Safari nibs to choose from to replace this one. That’s a big plus for this pen, since if you’ve invested in a few Safari or AL-Star or Vista Lamy fountain pens, you can swap the nibs around very easily.

I filled the Lamy Studio Terracotta with the Diamine Terracotta 150th Anniversary ink, and they go fabulously together. The Diamine Terracotta (and the Diamine Safari) are my favourites of the Diamine 150th anniversary inks, as it’s such a unique colour, with some nice shading, but it isn’t super saturated. This means that it can be used safely with vintage fountain pens, and that it can add a little va-va-voom to your office work without drawing too much attention to itself. It almost looks like a boring brown, but it very much isn’t. I love that in an ink.

So, what’s the verdict? If the Lamy Studio had a different grip then it would be a five star pen. As it is, I don’t recommend it. The Diamine Terracotta though is an ink worth having, especially if you’re just starting out with exploring brown ink, or if you want an interesting ink to use in vintage fountain pens.

I got these notebooks because I like Field Notes more minimalist designs, and this is most certainly one of them. I’m not a fan of dot grid though, so I’m not sure whether I’ll actually enjoy using it.

The orange highlights go well with the cream coloured covers and the grey type. 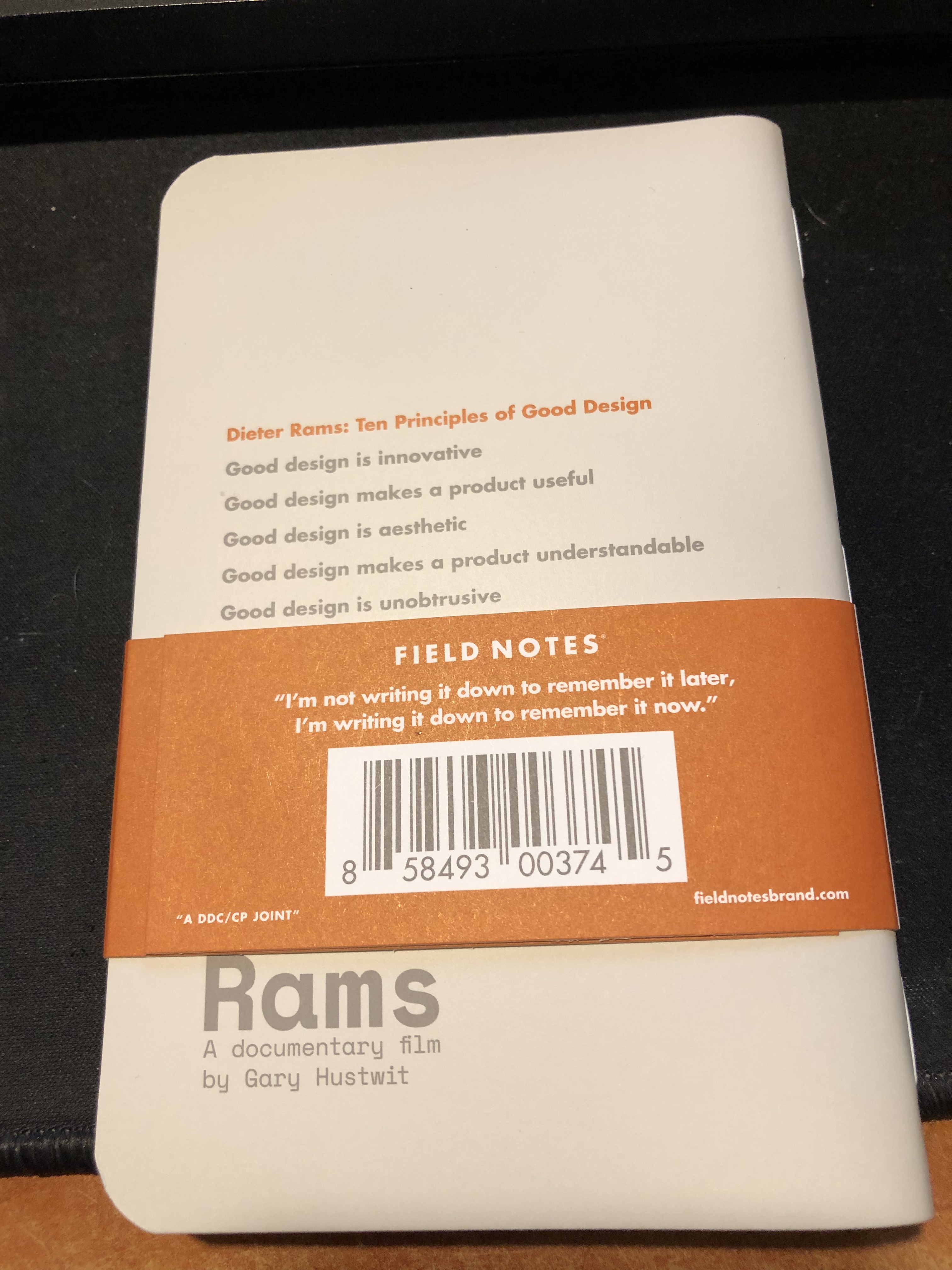 White staples, to complement the covers:

The best part of this notebook, Dieter Rams Ten Principles of Good Design:

Testing the pages a bit:

The reverse side of the page: 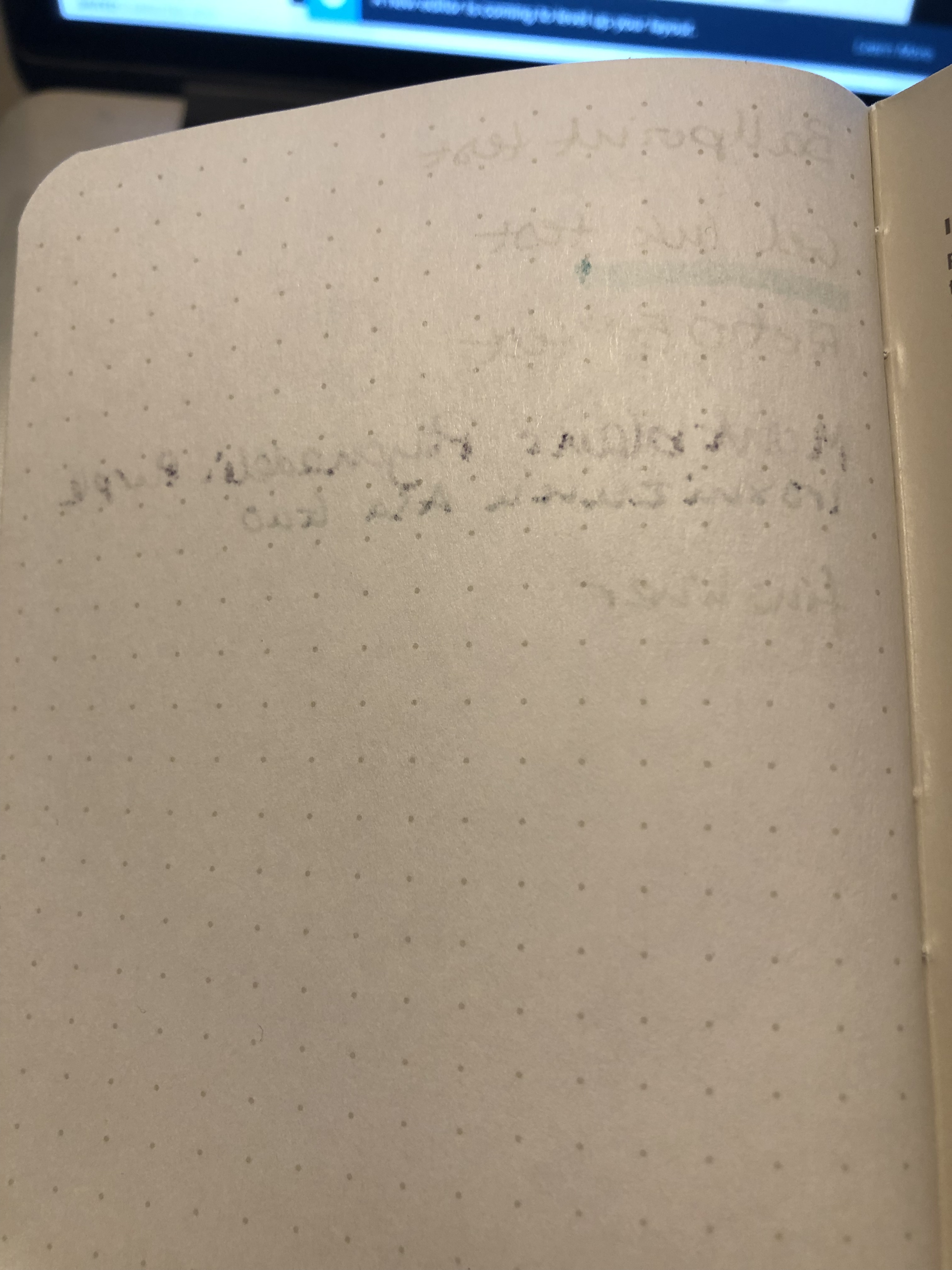 The Field Notes Rams edition is a utilitarian notebook that would be perfect with a Lamy 2000, provided that you’d fill the pen with something like Noodler’s Black. As it is, because of the dot grid, I have no idea when and how this edition will get into my rotation. If you prefer dot grid notebooks, this notebook is definitely worth checking out. Otherwise, the more colourful Three Missions or the more interesting Clandestine would probably be a better purchase.

It looks like another year without winter here. I drew this during an Urban Sketchers sketch crawl, but since the sun was right in my face and it was blazing hot (31 degrees centigrade), I didn’t place the shadows properly.